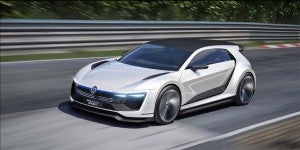 VW is beginning to lose momentum in key markets, including Europe and the U.S.

The emissions testing scandal that’s enveloped Volkswagen is taking a toll on the maker’s global sales and market share – though nowhere is the impact more obvious than in the United States.

The core VW brand saw a 2.4% decline worldwide last month, according to industry numbers, with demand for the first 11 months of 2015 off by 4.5%. That’s all but certain to assure that the maker slips to second place behind Toyota for the full year after briefly surging into the lead in the global sales sweepstakes for the first half of 2015.

The VW brand gained 2.8% in Europe for November, but it lagged well back of the overall 14% industry upturn as the European market has begun to emerge from more than a half-decade-long downturn. As a result, the entire Volkswagen Group, including such brands as Seat, Skoda, Audi and Bentley, have seen their share of the European market slide from 26.6% in November 2014 to 24.3% last month.

The biggest impact was in the U.S., however, where the Volkswagen brand tumbled 25% in November, even as the industry overall headed into record territory. Part of the problem is that VW can’t sell diesel-powered models like the Golf TDI that have, in recent years, accounted for 25% of its American volume.

It remains uncertain when they’ll be back in showrooms, VW officials still working with the U.S. Environmental Protection Agency to come up with a fix for the 2.0-liter diesel engine that was rigged with an illegal “defeat device” designed to cheat on emissions tests.

The loss of diesel models, like the Golf TDI, had a particularly harsh impact on VW in the U.S.

In September, the EPA accused VW of cheating, VW quickly acknowledging the subterfuge affecting 482,000 vehicles sold in the States, and 11 million, in total, worldwide. It has since confirmed it violated U.S. standards with its 3.0-liter turbodiesel, as well.

That leaves the maker potentially liable for more than $18 billion in EPA fines, as well as possible penalties that could come as the result of a U.S. Justice Department criminal probe. Meanwhile, a federal court in California has been assigned to hear more than 450 lawsuits stemming from the scandal.

VW has set aside more than $7 billion to help cover the potential costs, while also lining up a credit line for more than $20 billion. But among the uncertainties it faces, the maker now has to rebuild consumer trip and head off a further weakening of its sales momentum.

That’s a big turnaround from the situation during the first half of 2015 when the Volkswagen Group surged past Toyota to become the world’s best-selling automaker – three years ahead of its internal target.

Toyota started to regain momentum going into the second half, and the diesel scandal has made it even more difficult for the German maker.

The issue may be the holiday gift competitors were looking for. VW has been the powerhouse in Europe, handily outselling rivals like General Motors’ Opel, Ford, Renault and others.

“A two-point loss of share in a single month is unprecedented,” and very much appreciated, said the head of a major VW competitor, asking not to be identified by name. “We’re normally looking at a tenth of a point or two.”

The European market has grown 8.6% through the first 11 months of this year, marking the industry’s best performance in years.