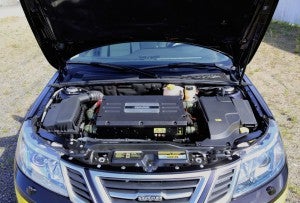 Saab is returning with a 9-3-type sedan that will be a battery electric for China and Sweden.

Saab aficionados were disappointed when the company essentially went on hiatus a few years back after it was scooped up by a group of Chinese investors and renamed National Electric Vehicle Sweden, or Nevs, with the idea that they iconic vehicles would be remade into electric vehicles.

When it happened, the idea seemed a bit far-fetched; however, Nevs just signed a $12 billion deal to provide 150,000 9-3-style sedans for Panda New Energy Co, a vehicle leasing company that features green vehicles in its fleet.

The vehicles should be delivered by the end of 2020 and the deal also calls for Nevs to provide an additional 100,000 other EVs and a variety of unnamed services.

“This is a strategic collaboration for Nevs not only in terms of the numbers of vehicles, but it is also an important step to implement our vision and new business plan. In the long term, we want to provide our customers with both sustainable products and mobility services,” said Stefan Tilk, Nevs vice chairman.

The consortium bought Saab out of bankruptcy in 2012 after a failed attempt to revive the brand by Spyker Cars of the Netherlands. After starting off in 2013 producing gasoline-fuelled models, Nevs announced in May 2014 a production stop of the 9-3 sedans due to cash flow problems.

Nevs spokesman Mikael Ostlund said the body of the electric vehicles would be built in Trollhattan, while the final assembly would be made in Nevs’ factory in Tianjin, China.

At this point, it’s unclear if the Saab badge will adorn these cars, especially since Nevs is no longer officially tied to the Saab AB aerospace company. The EVs could actually be found in even more markets.

(Click Here for details about why auto suppliers are expecting an acquisition binge.)

Nevs said earlier that it would sell the intellectual property rights for the 9-3 to the Turkish government, which plans to make it the official Turkish National Car. It too would make an EV version ready for 2020. The goal is for 85-90% of the components to come from the country.

“From design to production, Turkey will be the center for all parts and processes regarding the first domestically produced car,” Interim Science, Industry and Technology Minister Fikri Işık said to Daily Sabah in October.

The move is just the latest in company’s recent past. After being a stand-alone company for decades, it was purchased by General Motors in 1989. The maker held the brand until its bankruptcy in 2009 forced it to get rid of the brand.

(To see more about Honda’s return to the pickup segment with the new Ridgeline, Click Here.)

Spyker Cars of the Netherlands bought the company and thought it could resurrect it, but lacked the financial and technical resources to do so. It languished in bankruptcy at that point until the Chinese investors purchased it in 2012.