BMW, Mercedes-Benz and Lexus slug it out for sales supremacy. 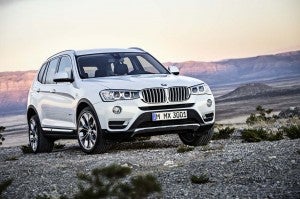 BMW has opened up a bigger lead for the luxury sales crown after a splendid November that saw sales of the X3 increase 124.5%.

The battle for luxury sales supremacy for the past few years has been waged by BMW and Mercedes-Benz, but now Lexus – a former champ – has jumped into the fray that looked like it would come down to the wire heading into November.

However, amidst a November sales frenzy that would make sharks look tame by comparison, the unexpected has happened: BMW has opened a significant lead over the others due to a stellar November for BMW and, perhaps even more stunning, an 11.7% drop in sales for Mercedes.

(Reality setting in for VW – and it doesn’t look good. For more, Click Here.)

“The all-new 7 Series did very well in its first full month of sales but there’s no question the trend is towards light trucks and the improving availability of our SAVs gave a nice boost to our overall sales in November,” said Ludwig Willisch, president and CEO, BMW of North America.

Mercedes’ downturn came in large measure because it was fighting history. It enjoyed its best month in 2015 with sales of 33,475 units, but last year it completed its best month ever with 37,925 vehicles sold.

While MBUSA recorded its highest month of the year; runout of popular model lines and limited availability of top-selling SUVs, including the new GLC, brought about the poor year-over-year result.

Despite the constraints, MBUSA president and CEO Stephen Cannon said, “November brought us enough volume to assure an all-time record year for MBUSA.”

(Automakers bankrolling more than half of new car purchases. Click Here for the story.)

U.S. auto sales this year are expected surpass the annual record of 17.4 million units set in 2000, thanks to rising incentives and favorable financing, low gas prices and other factors.