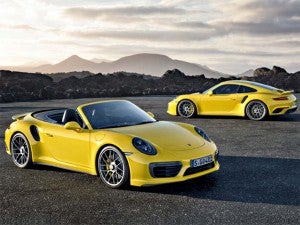 Never one to settle for something that’s simply fast, Porsche plans to push the limits a little further with the introduction of two new top-of-the-line versions of the familiar 911 at next month’s North American International Auto Show in Detroit.

Both the Porsche 911 Turbo and 911 Turbo S models will see a significant bump in horsepower for 2017 that will help them both launch from 0 to 60 in less than three seconds, according to the German maker.

“The powertrain enhancements take the performance of the 911 Turbo models to even higher levels than before,” said a release from Porsche. But it also notes that the 2017 updates involve more than just raw acceleration.

The new models, available in both coupe and convertible bodies, see their biggest changes in the engine compartment, however. The 3.8-liter twin-turbo six in the 2017 Porsche 911 Turbo will now make 540 horsepower, a 20 hp increase Porsche says was achieved by modifying the intake ports and switching to new fuel injectors that allow for higher fuel pressure. 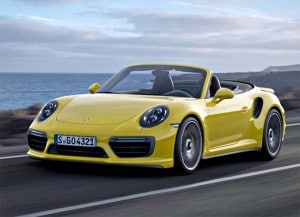 The 2017 Porsche 911 Turbo S, meanwhile, jumps to 580 hp, while its maximum torque reaches 553 pound-feet in overboost mode, compared to 523 for the Turbo. The Turbo S also has a higher, 7,200 rpm redline – the Turbo topping out at 7,000 rpm. The S model gets the same new gear as the base 911 Turbo, as well as new turbochargers with larger impellers.

The 2017 models now get what Porsche calls a “dynamic boost function” to improve throttle response. Among other things, under hard acceleration it maintains boost pressure even when the accelerator pedal is briefly released, as can happen when carving through sharp corners.

Porsche expects to release fuel economy data closer to launch but it’s noteworthy that other versions of the 911 have seen mileage rise even with improved performance. 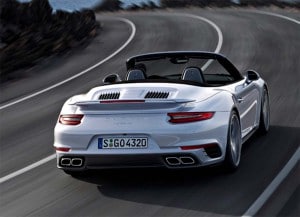 Among other changes, “The chassis of the new 911 Turbo models with PASM as standard now offers an even greater spread between performance and comfort,” the maker said, referring to the Porsche Active Stability Management system.

The Turbo S model is loaded with new features, including the maker’s Composite Ceramic Brakes. There’s also a lift system to raise the front axle by 1.5 inches to help clear obstacles when parking.

As with all other 911 variants, the Turbo and Turbo S models feature as standard the Porsche Communications Management system, which includes navigation technology.