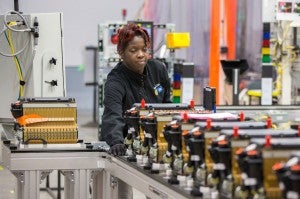 Many of the mergers and acquisitions are likely to happen in high-tech areas.

As tough as the Great Recession was on automotive manufacturers like General Motors and Chrysler Corp., it arguably was even tougher on industry suppliers, scores going bankrupt and many force to close their doors for good.

Now, the dramatic upturn is buoying bottom lines and, flush with cash, a new survey finds, the industry’s parts manufacturers are set to go on a buying spree. That said, suppliers aren’t just tossing their money around, more than three out of five saying they plan to focus on cost cutting and other efficiency matters in 2016.

“Nearly 60% of survey respondents are expecting to pursue acquisitions in the next 12 months,” according to the annual Capital Confidence Barometer pulled together by consulting firm EY.

The majority of the planned deals are relatively modest in size, reveals EY which used to be known as Ernst & Young. Nonetheless, deals of $250 million or more make up nearly a quarter of the planned mergers and acquisition, or M&A, activity

There are plenty of reasons why the coming year could see a spate of deal-making. Despite this week’s rate hike by the U.S. Federal Reserve, money is still relatively cheap. There is also plenty of pent-up demand, deals that might have been made in years past had the economy been stronger, financial analysts suggest.

A full 85% of the automotive executives EY surveyed said they see the economy continuing to improve – and an equal number were bullish about the M&A market over the next 12 months.

It’s not surprising to see part manufacturers make acquisitions that expand their presence in their own niche markets. There’s been a significant consolidation in interiors, for example. But the study finds that “57% of automotive companies intend to pursue acquisitions outside their own sector.”

In some cases, that appears to show suppliers of commodity parts are pursuing potentially higher-profit lines of business. But it also indicates the dramatic transformation reshaping the auto industry, much of it driven by the digital revolution.

Today’s cars typically have more microprocessors onboard than you’ll find in the average home, and some of the biggest areas of growth are expected to be in high-tech infotainment and safety. The emerging field of autonomous driving is anticipated to produce tens of billions of dollars in all-new business within the next decade, other studies have shown.

Another trend influencing the new merger mania is globalization. The vast majority of sales growth for the industry is now expected to come from emerging markets like China and India. So, it’s likely no surprise that “While more than 20% of automotive companies are planning to acquire in their home country or domestic market, a larger number are looking not just across borders but outside of their immediate region entirely,” says the EY  study.

Nearly half of the companies surveyed say they’re expecting to make acquisitions outside their immediate region. The top investment destinations are India, the U.S., Germany, China and the United Kingdom.

About a third of the companies surveyed say they are focused on the Eurozone, and that appears to reflect the fact that this market is finally turning up after a painfully long recession. That said, economic and political volatility in Europe is seen as one of the “greatest economic risks” to the auto industry over the next 12 months. Volatile commodities and currency are seen as an even bigger threat.

How much longer the M&A binge will continue is uncertain. Recent forecasts have suggested the U.S. auto industry could reach the top of its current cycle by the end of 2016, and a number of experts, including forecasters at Toyota, warn that global auto sales may be flat in the coming year. That could explain the current push for mergers and acquisitions: supplier industry executives trying to better position themselves for the next downturn.

That may explain why only 49% of the firms surveyed say they intend to create new jobs over the next 12 months. If anything, 61% report plans to improve operational efficiency and focus on cost reduction.