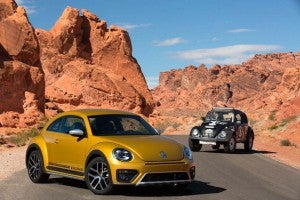 The new Volkswagen Beetle Dune shown with a classic VW Baja Bug of the 1960s.

Volkswagen is drawing inspiration from its past for two special-edition models debuting at the 2015 Los Angeles Auto Show.

The Beetle Dune, says VW, “draws inspiration” from the classic Baja Bugs of the 1960s. The Beetle Denim, meanwhile, is a “contemporary tribute to the 1970s Beetle Jeans model.”

Of course, the latest version of the VW Beetle is itself more than a bit retro, picking up on the original Bug’s design, or at least as much as possible while still meeting emissions, crash and fuel economy standards.

Only 2,000 copies of the VW Beetle Denim will be produced, all as convertibles. The first of them will arrive in U.S. showrooms early next year. As with the original Jeans model the new model will feature a distinctive jeans-inspired fabric, available in either Pure White or Stonewashed Blue. 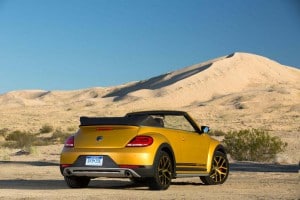 The convertible version of the Beetle Dune won't reach showrooms until later next year.

Even the convertible top will pick up on the theme, with a denim-like fabric finished in dark blue. The interior will feature jeans-like pockets with distinctive “Beetle” tags.

It will be powered by a 1.8-liter turbocharged I-4 making 170-horsepower and 184 pound-feet of torque.

As for the VW Beetle Dune, this limited-edition package will be offered in either coupe or convertible configuration, and will also go on sale early in 2016.

The new Dune successfully captures the iconic spirit of Baja Beetles, with a more rugged feel and amenities never offered before on the third-generation Beetle,” said Joerg Sommer, vice president of marketing strategy for Volkswagen of America. “We are confident the new Dune will appeal to both new and returning Beetle customers.” 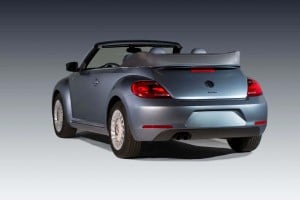 The VW Beetle Denim will only be offered as a ragtop.

The new model is designed to give a more rugged appearance than a stock Gen-3 Beetle, with new front and rear bumper fascias and oversized wheel arch extensions flowing into the bumpers. It also boasts an additional 0.4 inches of ground clearance, while the track is widened 0.6 inches compared to the standard VW Beetle.

Polished aluminum sills and black trim strips are designed to add a feel of the original Beetle Dune’s running boards. There’s also a large rear spoiler and the rear diffuser functions like a skid plate.

There are two honeycomb vents on either side of the enlarged air intake containing the foglights. A special package adds bi-xenon headlamps and LED tail and daytime running lights. 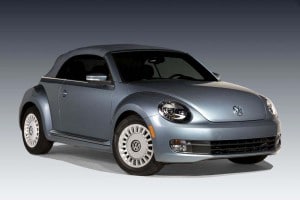 The Volkswagen Beetle Denim is a replay of the 1970s-era Beetle Jeans model.

From a tech standpoint, the Composition Color infotainment system is anchored by a 6.3-inch touchscreen, which offers smartphone-like swipe and pinch controls.

The VW Beetle Dune will use the same engine as the Beetle Denim.

The coupe will arrive in U.S. showrooms during the first quarter of 2016, the convertible following up next autumn.