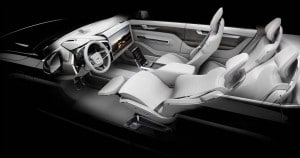 Inside the Volvo Concept 26, the driver's seat laid back to snooze or watch TV.

Like it or not, autonomous vehicles appear to be right around the corner. And they’re likely to have a significant impact on the way we live our lives on the road.

But beyond having the ability to take our hands off the wheel, what exactly does that mean? That’s something Volvo aims to demonstrate with the debut of the Concept 26. The self-driving show car, the maker explains, offers a hint of “how luxury autonomous cars will integrate into daily life.”

“Volvo Concept 26 addresses the notion that driving can still be fun and liberating on the right day and on the right road,” says Anders Tylman-Mikiewicz, the general manager of Volvo’s Concept Center, where the prototype was developed.

But on the wrong day or the wrong road, autonomous vehicles can ease the strain of the daily commute which, “in many metro areas,” he adds, “is stressful, frustrating and even broken.”

Volvo suggests that autonomous vehicles could be considered “time machines,” because they help regain the time a motorist might spend crawling along in traffic for more useful or relaxing purposes. The show car derives its name from the average 26 minutes a day drivers in traffic-snarled cities like Los Angeles waste each day to congestion – something that adds up to 100s of hours each year. 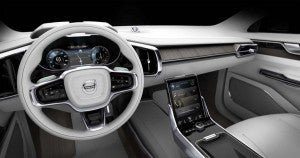 The basic Volvo Concept 26 dashboard resembles that used for the new XC90 SUV.

There are three different driving modes in the Volvo Concept 26:

To provide a driver those options, the Volvo Concept 26 is equipped with features such as a tablet computer built into the center console, a fold-away tray table and a 25-inch color monitor that pops out of the passenger-side dashboard.

The Concept 26 shares the same new Scalable Product Architecture used for most of Volvo’s future products, including its new XC90 SUV.

With its traditional focus on safety, the maker has taken a serious interest in autonomous vehicle technology and earlier this year announced plans to launch a pilot program on public roads near its headquarters in Gothenberg, Sweden.

Whether it might want to test a road-going version of the Concept 26 remains to be seen. Until now, manufacturers have taken a more limited approach to self-driving technology, which would require a driver to be ready to regain control of the vehicle at a moment’s notice. Most experts don’t anticipate truly driverless technology to still be a couple decades off. But Google is hoping to soon begin testing a version of its new bubble-cars that will come without steering wheel or pedals.

If it’s successful, vehicles like the Volvo Concept 26 or the recent Mercedes-Benz F 015 could become part of daily life on the road sooner than many had anticipated.

(Tesla dips its toe in autonomous waters with new AutoPilot system. Click Here to see how it works.)