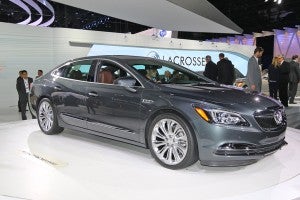 Buick has been trying to convince skeptical American auto buyers that its latest offerings aren’t the bland and forgettable products of the past. And perhaps nothing has come closer to getting that message across than the striking Buick Avenir concept vehicle that debuted at the Detroit Auto Show last January.

While there are currently no plans to put the show car into production, the General Motors “premium” brand could turn heads again with the Los Angeles Auto Show debut of the new 2017 Buick LaCrosse. The familiar nameplate gets an all-new look that borrows liberally from the Avenir concept.

“The new LaCrosse signals the next phase of Buick’s international momentum,” said Duncan Aldred, vice president of Buick Sales and Marketing, who not so modestly declares the new sedan “drop-dead gorgeous.”

Buick is taking aim at the Lexus brand with its latest models – the 2017 LaCrosse directly targeting the Japanese maker’s mainstay ES sedan. It hopes to get there by delivering more distinctive design and cutting-edge technology while matching Lexus – it clams – in terms of noise, vibration and harshness. 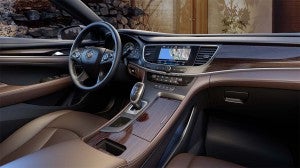 The new LaCrosse has the Lexus ES square in its sights when it comes to entry-level luxury sedans.

“Its quietness, comfort and connectivity were developed to set new standards in the segment, supported by technologies not offered on competitors such as the Lexus ES,” said Aldred.

Visually, the new LaCrosse picks up on such Avenir cues as the large, new grille design with wing-shaped elements anchored by the familiar tri-color Buick logo. The overall look of the coupe-like four-door is more refined and elegant, both outside and in.

(Buick moving ahead with plans to bring a Chinese car to the U.S. For more, Click Here.)

It helps to shift to an all-new platform that sees the wheelbase of the 2017 Buick LaCrosse stretch 2.7 inches, its overall length growing 0.6 inches. The roof, meanwhile, drops 1.6 inches, while the wheels push 1.3 inches outward up front, and 1.1 inches in the rear.

Despite the larger proportions, the new LaCrosse is 300 pounds lighter than the outgoing sedan, in part due to the extensive use of high-strength steel alloys, Buick officials note. Even in its effort to cut interior noise, they point to new “dissipative sound-absorbing materials that are lower in mass.”

The new LaCrosse gets a MacPherson strut front suspension and Buick’s HiPer strut rear suspension. A continuously variable damping system is an option on the 2017 model that can adjust its settings every two milliseconds. It also permits drivers to choose between Touring and Sport modes. 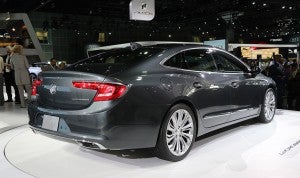 The new LaCrosse is 300 pounds lighter than the outgoing sedan, in part due to the extensive use of high-strength steel alloys.

Under the hood, the 2017 Buick LaCrosse will feature a 3.6-liter V-6 making 305 horsepower and 268 pound-feet of torque. It delivers that through a new eight-speed automatic. An all-wheel-drive system is optional.

(Click Here for details about Buick’s plans for a new production Avenir, sort of.)

Among the technology offered on the 2017 Buick LaCrosse, the maker has added a new wireless cellphone charging system. An 8-inch infotainment display tops the sedan’s center stack and runs the Buick Intellilink system. There’s also a head-up display system available.

And something that should win over parents with teen drivers, there’s a new monitoring system which, Buick explains, “encourages safe driving habits for new drivers by muting the audio or any device paired with the vehicle when front-seat occupants aren’t wearing their safety belts. It also provides audible and visual warnings when the vehicle is traveling over predetermined speeds – and offers a ‘report card’ for parents.”

The 2017 Buick LaCrosse is set to reach showrooms early next summer.