Police Pull Over Google Car for Tying Up Traffic 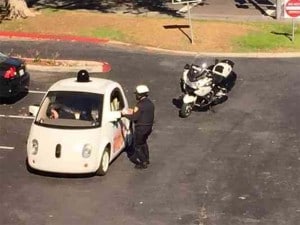 A traffic stop in the Silicon Valley suburb of Mountain View has raised a number of new question about autonomous vehicles, among other things who gets a ticket if a self-driving car is pulled over?

A police officer stopped one of the bubble-shapped “Google Cars” last week because it was tying up traffic, driving at only 24 miles per hour in a 35 mph zone. The person behind the wheel of the two-seater was ultimately let go without a citation, the cop apparently more interested in finding out how the autonomous vehicle works,

He used the stop to “learn more about how the car was choosing speeds along certain roadways and to educate the operators about impeding traffic,” explained a post on the blog operated by Google’s autonomous vehicle unit. “Driving too slowly? Bet humans don’t get pulled over for that too often,” the post noted.

It wasn’t the first time the police have been involved with Google vehicles, however. Various self-driving prototypes operated by the tech giant have so far been involved in 17 minor collisions since May 2010, Google has reported. Most of those were modified Lexus and Toyota products, but the latest traffic stop involved a specially designed vehicle produced for Google by Detroit supplier Roush Enterprises.

Google has been operating the new prototypes – of which it eventually plans to have 100 – near its Silicon Valley headquarters, as well as in Austin, Texas, a major high-tech center. Initial versions of the bubble-cars have conventional controls, but the company hopes to eliminate steering wheel and pedals from later models, if given regulatory approval, leaving only an emergency stop button.

Google limits the speed of its autonomous vehicle prototypes to just 25 mph.

For the time being, the prototypes are limited to speeds of no more than 25 mph, a potential problem when they’re operated on public roads with higher limits – many of them near in hilly Silicon Valley providing limit opportunities for other motorists to pass.

The lower speed is meant to reduce the potential for accidents and injuries. Despite experiencing 17 crashes so far, state records indicate only one involved minor injuries. And Google officials have emphasized that in all the collisions it was the other, human driver at fault. Legally, anyway.

The Silicon Valley giant also notes that its autonomous vehicles have so far logged 2.2 million miles of testing, more than half of that in self-driving mode. But a recent study by the University of Michigan Transportation Research Institute, or UMTRI, raised a red flag, cautioning that the number of crashes involving those autonomous vehicles is several times higher than for conventional vehicles.

Google officials have acknowledged the need to develop more sophisticated programming for their autonomous vehicles that can drive more like a human. That might mean going through a yellow light, rather than immediately slamming on the brakes under all circumstances, so there are fewer rear-end collisions.

It’s unclear whether Google will now limit where its autonomous bubble-cars operate or raise the speed they can operate at.

In a blog post, the company defended its policy, noting, “We’ve capped the speed of our prototype vehicles at 25 mph for safety reasons. We want them to feel friendly and approachable, rather than zooming scarily through neighborhood streets.”

So far, at least, “we’ve never been ticketed,” the post added. But it appears it may be ticking off motorists – and police officers – forced to travel behind it well below the speed limit.

(For 1st to test at new Mcity autonomous vehicle proving grounds. Click Here for the story.)