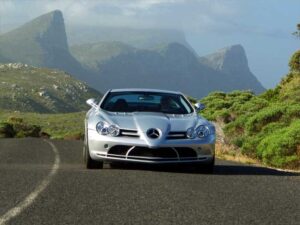 The Mercedes-McLaren SLR was first unveiled in 2003. It's shown here during a debut drive.

The new Mercedes-AMG GT is an intimidating beast, meant to challenge the likes of the venerable Porsche 911. But it’s not a true replacement for two of the maker’s recent supercars, the SLR and SLS models.

Now, it seems, Mercedes wants to fill that gap and take advantage of the growing demand for vehicles that can deliver as much as 1,000 horsepower or more. According to a report in the well-connected German magazine, Auto Bild, Mercedes is looking at two alternatives that could push the pony count near, and perhaps into the four-figure range.

It would join a select group of so-called ultracars, including the Koenigsegg Agera and Bugatti Veyron. But it would take a very different approach when it comes to delivering all that muscle.

Despite increasingly rigid emissions and fuel economy mandates, automakers have been steadily increasing the power of their top-line models – and finding a ready audience. Even relatively plebian products now deliver mind-boggling numbers, the Dodge Challenger and Hellcat editions churning out 707 hp.

While the number of 1,000-plus horsepower offerings remains relatively slim, there’s a growing list of models nudging ever closer, including the Ferrari LaFerrari, Porsche 918 and McLaren P1. And whichever one of its two options Mercedes-AMG follows, it will have at least one key feature in common with those three flagships. 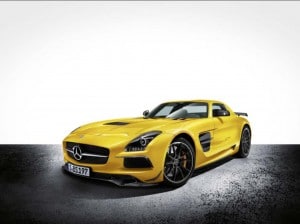 Both of them would get a boost from electric motors to make their numbers.

One version would be a successor to the SLR, the long-nosed supercar first revealed in 2003 as a joint venture pairing Mercedes-Benz and McLaren. According to Auto Bild, it would use a front-engine/rear-drive layout. The powertrain would move away from the big V-8 of the old SLR, however, opting instead for a twin-turbocharged V-6. It would be paired with an electric motor to get even more power, at least 650 hp in its “base” form.

The new model would feature active aerodynamics to reduce wind resistance and maximize high-speed downforce. It would also adopt what the magazine describes as a “new door concept,” rather than the old SLR’s scissor doors.

A coupe version would be first to market, followed by a convertible. An even more exclusive – read powerful – Black Series version would follow. Production would be limited, and the reported price tag would come in somewhere between $250,000 and $300,000.

Mercedes is reportedly looking at something even more exotic, a carbon fiber hypercar that would pop the 1,000 hp barrier. This version would opt for a mid-engine layout using a turbocharged V-8 paired with twin electric motors – likely to create a through-the-road all-wheel-drive system that could better deliver power to the pavement. 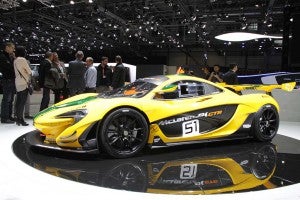 Though most motorists likely associate the term, hybrid, with slow-as-molasses mileage misers like the Toyota Prius, the reality is that electrified powertrains can deliver enormous performance advantages. Electric motors generate maximum torque as soon as they start spinning, which means they can overcome the off-the-line lag of traditional turbochargers.

There are some disadvantages, notably in terms of weight and complexity. But battery drive systems are coming down in both mass and size, and that makes them even more attractive to high-line manufacturers looking to deliver performance while also improving their mileage and emissions numbers.