Forget Hybrids and Hydrogen Cars; Some Just Have to Have a V-12 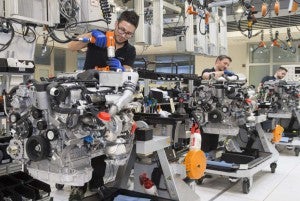 Daimler has moved production of its V-12 engines to Mannheim to boost production.

Facing tough new mileage and emissions standards, automakers have been shifting to smaller and more environmentally friendly powertrains. The V-8s that once dominated the American highway have become more and more uncommon as even performance cars switch to downsized turbo and hybrid alternatives.

Yet, some buyers just aren’t ready to switch, and that’s led to a bit of a renaissance for one type of engine environmentalists would clearly love to see vanish in the junkyard. Demand has been so strong, in fact, that Daimler AG has moved its V-12 engine line to a new plant in order to boost production.

“Supplying our customers as fast as possible is highly important to us,” says Tobias Moers, Chairman of the Board of Management of Mercedes-AMG GmbH. “We do not have any possibilities for expansion in Affalterbach at present, so we have decided to transfer the assembly of the twelve-cylinder engines to the Daimler site in Mannheim.”

Affalterbach is the home plant for AMG, the high-performance brand-within-a-brand, and the traditional source of V-12s for Mercedes. Those big engines are today used in a number of the maker’s most exclusive products, including the newly updated Mercedes-AMG S65 roadster, as well as the big Mercedes-Maybach S600 limousine.

As has been the case at the old Affalterbach plant, the new Manheim V-12 line will hold true to AMG’s “one man, one engine” philosophy, each V-12 “built completely by hand by just one engine fitter,” the maker explains. 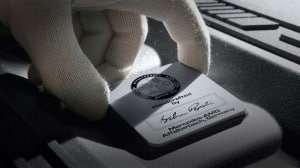 Each Mercedes engine is produced -- and labeled -- by just a single technician.

Daimler is by no means the only automaker still committed to 12-cylinder engines. Among those offering them as options are Aston Martin, Bentley, BMW, Ferrari, Lamborghini and Rolls-Royce. Volkswagen subsidiaries have been using an unusual “W” layout of the pistons, rather than a classic “V”, however.

“I firmly believe that everyone who is worth anything at all should own a 12-cylinder car before they die,” automotive journalist, author, publisher and raconteur David E. Davis famously declared. And wealthy buyers – and some less affluent motorists willing to stretch their budgets – have long agreed.

But what’s the appeal?

A classic V-12 is not only powerful but silky smooth, thanks to the basic physics of the design. At any moment, three cylinders will be in each of the four cycles of a four-stroke engine. Engineers can eliminate things like heavy counterweights on the crankshaft, meanwhile, both simplifying and boosting the performance of these engines for racing applications. It’s also easier to tune the exhaust of a V-12 compared to a V-8 with similar power.

There have been engines with more than 12 cylinders, especially for use in non-automotive applications, but none have survived in modern use. 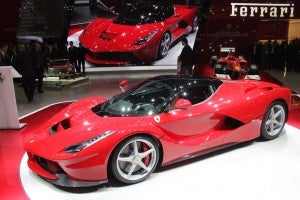 The La Ferrari gets an added hybrid drive system to help boost performance and mileage.

Just how much longer the V-12 or W-12 will be around is far from certain. A few automakers, such as Jaguar, have phased them out while others have cut the number of available models. Bentley now offers buyers an option of 12-cylinder powertrains in such vehicles as the Continental Flying Spur sedan.

Tough emissions and mileage standards have been forcing manufacturers to pare back even on V-8s. Volvo, for one, is switching to an all-four-cylinder strategy as new products like the XC90 SUV roll out. Volvo – like other makers – is using new technologies, such as turbocharging, supercharging and hybridization, to offset the fewer cylinders and smaller displacement of its new engines.

Even for Mercedes, those V-12 models account for low single-digit percentages of its overall production – which means it can largely offset the impact on its corporate mileage and emissions numbers. But whether it will continue to have that option is far from certain.

Some analysts believe that every vehicle sold in the U.S. by 2025 – when the Corporate Average Fuel Economy standard jumps to 54.5 mpg – will have to be electrified in some form or another. But even that doesn’t rule out the V-12. Ferrari paired a hybrid system with a 12-cylinder engine in its flagship La Ferrari.

The V-12 is becoming “far more exclusive than it ever was,” suggests Dave Sullivan, a senior analyst with AutoPacific, Inc. “It is still one of the most unique things available at a time when everything else is being commonized.”

So, for those with a fat enough wallet, these big engines just might be around for some time.

(Battery-based vehicles could soon generate 25% of Audi sales. Click Here for the story.)