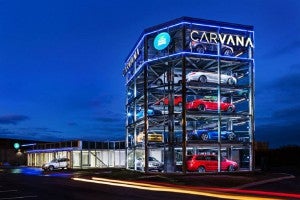 Yup and you should see the coins it takes!

Online car seller Carvana recently constructed a five-story, glass-encased, lit-up-like-Vegas vending machine next to Interstate 65 near Nashville filled with used cars for sale. Actually, the cars in the tower are waiting to be picked up, as they’re sold online.

Several years ago, the California-based retailer moved to an online sales model in the mold of CarMax and others. However, it found that instead of having the vehicles delivered, many buyers wanted to come and get their new ride.

There was an added bonus for Carvana, according to CEO Ernie Garcia, it saved the company money. So it set up a pickup site in Atlanta and after it was deemed successful, that allowed the company to plow the savings into making the pickup experience unique. 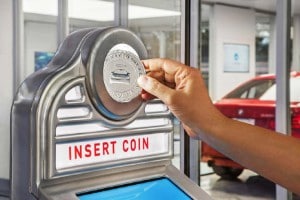 “We knew that if [customers] chose to pick up the car we would save some money, and so we could invest that money in giving them a really, really great experience,” Garcia told Verge.com.

It’s similar to a setup offered by Volkswagen. In 2011, the automaker opened its massive, silo-like autostadt, or “Car City.” Housed in two glass towers near the company’s headquarters in Wolfsburg, Germany, there are 400 cars that can be retrieved with robotic arms shooting up the center of each tower.

However, the big difference with Carvana’s set up is that it’s coin operated … really big coin operated, in fact. The token is the size of a large Frisbee. Once the customer puts the token in the slot, a robotic arm goes up the tower where the car is stored and retrieves it. After it’s down, another robot “drives” it down a hallway, parking it in a delivery bay.

At that point, the customer can look the vehicle over and a Carvana rep walks the buyer through the various aspects of the vehicle. The buyer can even take it for a test drive because even though there is an agreement in place (i.e. a car has been selected, price has been settled and financing secured – often in less than 20 minutes), no funds are transferred until the buyer agrees to take the car. Carvana also has a seven-day satisfaction guarantee that allows the vehicle to be returned no questions asked.

“We even proactively call them on the sixth day and remind them that their return policy is expiring to ensure that they’re happy with the car,” Garcia said, adding the “test-to-own” period “way more useful to a consumer than four right turns around a dealership.”

(Click Here for details about the demand for new safety, autonomous driving features.)

In fact, Garcia says the funds aren’t actually transferred until the customer takes the final receipt of the car and drives it off the lot. And even when that happens, Carvana offers a seven-day, “no questions asked” return policy. “We even proactively call them on the sixth day and remind them that their return policy is expiring to ensure that they’re happy with the car,” Garcia says. He calls the “test-to-own” period “way more useful to a consumer than four right turns around a dealership.”

While showy, the new set up has a practical side for the company. The current site is smaller than a conventional dealership and requires a fraction of the people resulting in significant cost savings. Carvana claims to sell cars for nearly $2,000 less than other dealers. Garcia is playing wait-and-see before expanding the concept, but he’s confident in the idea.

“I think it’s going to be an incredible customer experience,” he told Verge. “And I think if we’ve got the car that they’re looking for, and we’re selling it for $1,500 to $2,000 less, and we offer a purchase process that takes 20 minutes, and then you get to go to a vending machine and watch your car moonwalk to you? I think people are going to respond to that.”