Human drivers may have trouble sharing the road with self-driving vehicles, warns study.

A Google car in traffic. A new study suggests autonomous vehicles are experiencing five times the rate of accidents as regular cars.

Proponents have promised a world in which crashes, injuries and fatalities are virtually absent, but a new study warns that, at least for now, autonomous vehicles aren’t coming close to meeting those expectations.

The limited number of test vehicles now on the road have been involved in crashes at five times the rate of conventional vehicles, according to an analysis by the University of Michigan’s Transportations Research Institute, or UMTRI. But the news wasn’t entirely bad.

“Self-driving vehicles were not at fault in any crashes they were involved in,” wrote researchers Brandon Schoettle and Michael Sivak. And, they added, “the overall severity of crash-related injuries
involving self-driving vehicles has been lower than for conventional vehicles.

Autonomous vehicle technology is rapidly moving from the realm of science fiction to the real world. Tesla Motors has now released a software update for its Model S sedan, dubbed AutoPilot, that allows a vehicle to operate hands-free on well-market, limited-access freeways. Cadillac, Mercedes-Benz, Nissan and several other makers plan to launch similar systems over the next few years.

Nissan intends to go even further, promising to put into production by 2020a fully autonomous vehicle, able to handle even complicated urban roads. It previewed what that might look like during a news conference last week marking the opening of the Tokyo Motor Show. 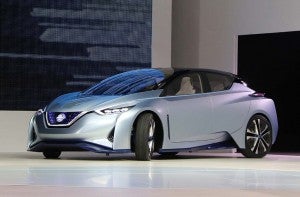 The IDS – short Intelligent Driving System – prototype would be able to “compensate for human error which causes more than 90% of accidents,” said Nissan CEO Carlos Ghosn.

The problem appears to be that, at least for now, humans and autonomous vehicles may not mix.

So far, the vast majority of accidents involving self-driving vehicles have been reported by Google, the tech giant already clocking hundreds of thousands of miles of testing in conventional vehicles converted for autonomous use, and now rolling out a fleet of specially designed self-driving “Google cars.” But a number of other manufacturers are now testing the technology on public roads – even truckmaker Freightliner.

For the purposes of the study, UMTRI researchers looked at 11 crashes involving self-driving cars – a figure that’s now gone higher.  But that’s among a relatively miniscule fleet that have, according to the study, clocked barely 1.2 million miles, all told.

When you work out the numbers, UMTRI determined the autonomous vehicles were five times as likely to be involved in a crash as conventional vehicles. But they added a number of significant caveats. For one, thing: the number of accidents involving human drivers is probably quite a bit higher than what police reports would indicate. So, the real ratio is likely a good bit narrower.

(Click Here to check out the Nissan IDS autonomous prototype.)

Injuries in those autonomous vehicle crashes have almost all been minor, so far, noted Schoettle and Sivak, in part because the self-driving cars are often being tested at lower speeds.

And, perhaps most importantly, every one of the accidents reported appears to have been the result of human error. But that doesn’t mean the autonomous vehicles are entirely without fault. Several other reports have warned that self-driving cars won’t operate in a vacuum. For decades to come, they’ll have to share the road with human drivers.

That’s something engineers have to keep in mind when, for example, they program an autonomous vehicle to stop at the first sign of a yellow light. Considering how often humans try to beat the red, that’s a formula that could cause problems, as police reports for a number of the Google crashes have indicated.

“That is something we are working on,” said Tetsuya Ijima, the chief engineer on Nissan’s autonomous vehicle program.

The company has not only hired software engineers to program its vehicles but even has an anthropologist on its team to try to understand the way humans actually drive, a critical factor that must be better understood before fully autonomous vehicle technology reach market early in the coming decade.

(Click Here for a test drive of a fully autonomous Nissan Leaf prototype.)