Toyota will cover the gamut with its Tokyo display. 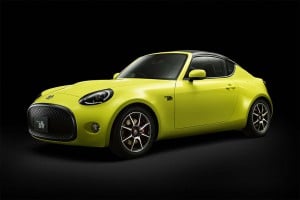 The Toyota S-FR is expected to anchor a three sports car line-up Toyota is developing.

It’s long been known for plain vanilla design and lackluster performance, an image Toyota is intent on transforming. And with the addition of a trio of new sports cars, it just might.

Just three weeks ahead of the biennial Tokyo Motor Show, Toyota is giving us a hint of what it will be putting on display, and the list includes three “very different” concept cars, as well as a downsized version of the talking robot it sent into space.

While the Kirobo Mini might push the cute factor to new limits, the Toyota S-FR will lead the Japanese giant into more sporty territory as one of three performance models it is soon expected to have in its line-up.

Short for Small, Front-engine, Rear-drive, the Toyota S-FR will appear on the Tokyo stage in concept form but is soon expected to anchor the trio of performance models, just below the model Americans know as the Scion FR-S. At the top end, Toyota will soon reveal the fruits of an ongoing joint venture with BMW that is expected to revive the long-absent Supra nameplate. 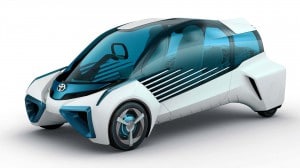 The hydrogen-powered Toyota FCV Plus concept rethinks the basic layout of an automobile.

With its wide-mouth grille, the Toyota S-FR concept boasts a somewhat retro look, picking up – but modernizing – some of the design cues of its ‘60s-era Sports 800 models. It boasts a wheelbase of 97.6 inches, roughly in-between the Scion FR-S and the latest Mazda Miata.

In a statement, the Japanese maker suggests, “The concept’s long nose and wide stance make for an archetypal sports car profile, while the familiar roundness of its frame inspires a feeling of closeness. The simple and modern finish of the interior rounds off a design that stresses approachable simplicity while conveying the vehicle’s performance and sporty spirit.

(Nissan’s Dayz concept is a mobile social media device. Click Here to check it out.)

Our own sources hint that Toyota is debating whether to bring the production model to the U.S., especially considering the modest success of the Scion FR-S. Japan and a number of other market should be luckier, production of the S-FR set to begin about a year from now. 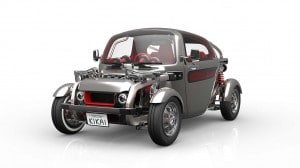 The Toyota Kikai Concept revels in the beauty of automotive machinery.

(Click Here to see what Honda is bringing to this year’s Tokyo Motor Show.)

While Toyota is intent on adding more “passion” to its line-up, a word favored by global boss Akio Toyoda, it isn’t walking away from more practical products, nor its hard-earned image of being an environmental leader.

The Japanese maker only just began selling its new Mirai hydrogen fuel-cell vehicle in the U.S., but it is giving a hint of where it might go next with the technology in the form of the FCV Plus concept. Toyota has been surprisingly reluctant to embrace the use of advanced lithium-ion batteries, contending that hydrogen is the power source of the future.

Among other things, it says the FCV Plus could serve as a mobile electric generator when not being drive.

The futuristic design suggests the degree to which alternative power might transform the way tomorrow’s cars are designed and engineered. The powertrain technology in this concept essentially lies below, rather than in front of, the driver, the fuel cell stack mounted between the front tires and the four electric motors built into its wheels. 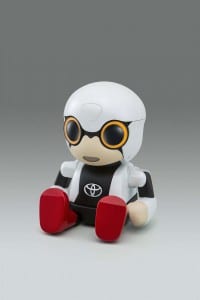 A mini version of Toyota's space station robot, Kirobo Mini wants to go for a ride, too.

“This allows for a spacious cabin despite the vehicle’s compact vehicle body,” explains Toyota. “By concentrating functional parts at the front and the rear of the vehicle, this next-generation fuel cell vehicle package creates an optimal weight balance and a wide field of vision.”

The Tokyo Motor Show is notorious for offering up wild, weird and wacky concept vehicles. Rival Honda will show off one prototype that looks almost like a rolling phone booth. Toyota will deliver its own extreme machine in the form of the Kikai.

“This concept takes the machinery, normally hidden beneath the vehicle body, and makes an open display of its beauty,” the maker says in a release. “Directly expressed in this way, the vehicle’s inner workings become part of the exterior.”

Think of the Toyota Kikai as sort of the automotive equivalent of the popular “bodies” exhibits that have been touring the U.S. showing us the inner workings of the human body. In this case, however, the unadorned machinery is meant to run.

Visually, Kikai comes across as a three-way blend of hot rod, dune buggy and those unique-to-Japan Kei-class minicars. The driver sits alone up front, more or less centered behind a set of classic, analog gauges. There are two additional seats behind.

(The return of the Mazda rotary RX? Click Here to find out what the Japanese maker is bringing to the Tokyo Motor Show.)

The Toyota Kikai appears to be the classic Tokyo concept car, with little likelihood of ever making production.

But what to say about Kirobo Mini? Looking like a character walking off the screen from a Japanese anime film, it’s a downsized version of the talking robot that Toyota built for use on the International Space Station.

“Kirobo Mini was created to be able to accompany its owners everywhere and communicate with them in a meaningful way,” explains Toyota’s news release, adding that, “Our aim is for Kirobo Mini to communicate with people through expressions and gestures, bringing smiles to their faces through daily exchanges that chart the course of an evolving relationship.”

That seems perfectly feasible for tech-crazy Japanese drivers. Whether American motorists would like to have a running conversation with four-inch robot sitting on the dash, well, that remains to be seen.