Japanese giant focusing on fuel-cell vehicles and hybrids, but not EVs.

Toyota has so far sold just 350 of its Mirai fuel-cell vehicles, but sees major growth ahead.

Toyota Motor Co. wants to virtually eliminate gasoline-powered vehicles from its fleet by 2050, and is betting that hydrogen cars, rather than electric vehicles, will be the long-term answer.

The Japanese maker recently introduced the Mirai, its first retail fuel-cell vehicle, and though sales have so far been measured in the hundreds, the target is to reach 30,000 annually by 2020, and reach even higher in the years beyond.

A number of other automakers are experimenting with hydrogen power; Hyundai already offers a fuel-cell version of its Tucson SUV, and Honda will launch a retail model next year. But most competitors are focusing on a mixed model of green vehicles, with a heavy emphasis on battery-based models, Toyota remains skeptical about the long-term role of electric vehicle technology.

“When we first announced the Mirai, we said we were at the start of the age of hydrogen,” Kiyotaka Ise, a senior managing officer for Toyota Motor Corp., told reporters in Tokyo. “The figure we’ve announced today is ambitious, but it needs to be to keep the ball rolling.”

Fuel cell vehicles are seen by many as the ultimate green car technology. They use a device, called a stack, to combine hydrogen and oxygen from the air. The process creates a flow of current that can run the same electric motors used for a battery car. The only exhaust gas is water vapor.

The Toyota Mirai has a range of up to 300 miles and can be refueled in about five minutes, comparable to a gasoline or diesel-powered vehicle – which is one reason proponents sometimes refer to the technology as a “refillable battery.”

(Honda to show off new hydrogen car at Tokyo Motor Show. Click Here to check it out.)

But there are plenty of skeptics, notably including Elon Musk, CEO of battery-carmaker Tesla Motors, who calls hydrogen technology “fool cells.” They point to the lack of a hydrogen refueling infrastructure,  the challenges of both creating the gas and then distributing it. 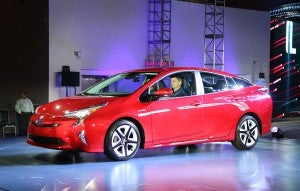 The 4th generation Toyota Prius rolls out during a splashy preview in Las Vegas last month.

There currently are barely a dozen public hydrogen pumps in California, Ground Zero for the launch of the technology, but the goal is to have more than 100 in place by 2020. Germany, meanwhile, is launching an aggressive plan to have more than 400 hydrogen stations open by decade’s end. And Japan is pushing for more pumps, partly through a new consortium joining erstwhile competitors Toyota, Nissan and Honda.

The limited hydrogen distribution network is one reason Toyota’s targets are, at once, both ambitious and modest. By 2020, officials said in Tokyo they expect to be selling 1.5 million hybrid-electric vehicles annually by 2020.

Toyota is just launching an all-new version of the Prius, the world’s first hybrid, and expects to boost fuel economy by 10%, to around 55 miles per gallon. The Toyota Prius is currently the world’s best-selling hybrid though, like other battery-based vehicles, sales have slowed in the wake of declining petroleum prices.

The 2016 Toyota Prius marks a surprise move by the maker, Toyota planning to offer buyers a choice of a conventional nickel-metal hybrid battery, or a pack using more advanced lithium-ion chemistry that can deliver more range in electric-only mode. 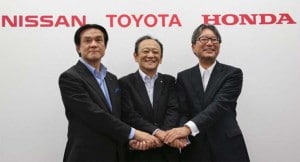 Toyota has been openly skeptical of battery power other than limited use of nickel-metal technology in hybrids. It is grudgingly planning a new version of the Prius plug-in hybrid, primarily to meet California’s demanding zero-emissions vehicle, or ZEV mandate. But the carmaker has made it clear it does not see a long-term future for plug-ins or pure battery-electric vehicles.

That stands in sharp contrast to competitors such as Nissan, Volkswagen, General Motors and even luxury brands such as Audi and Mercedes-Benz, who see a mix of battery-based vehicles and, possibly, hydrogen power.

Few see the internal combustion engine vanishing entirely. But vehicles like the Toyota Prius are beginning to relegate it to a secondary position. And it is looking at even hybrids being surpassed, long-term, by fuel cells.

Auto industry critics, if anything, would like to see things move faster in a bid to make automotive transportation carbon neutral.

“You may think 35 years is a long time,” Senior Managing Officer Ise said. “But for an automaker to envision all combustion engines as gone is pretty extraordinary.”

(Gas-powered cars could soon become the exception, rather than the rule, in California. Click Here for more.)