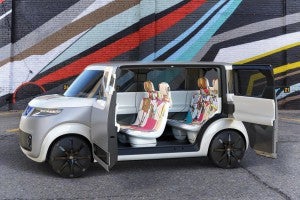 Often home to the quirkiest of concept vehicles, this year’s Tokyo Motor Show won’t disappoint those seeking unique, technology driven idea generators — at least not if Nissan has anything to say about it.

The Japanese maker is bringing 20 vehicles to the biennial event. Some, like the sporty Gripz crossover, have been seen already, but the star of the show could bethe maker’s Teatro for Dayz concept set to make its world debut in Tokyo.

The exterior isn’t necessarily cutting edge, reminiscent of the boxy Nissan Cube, but it’s the functionality that makes it distinctive. The concept is designed to cater to the desire of younger drivers to have the latest in technology while keeping them interested in cars.

For older drivers, cars meant freedom, but in a world where everyone is available at the touch of a digital button, younger drivers don’t see cars in the same light. The Dayz show car could change that, Nissan claims.

“The generation now getting their first driver’s licenses has always been connected through digital devices, email, social media and so forth,” said Hidemi Sasaki, Nissan’s Product Planning general manager. 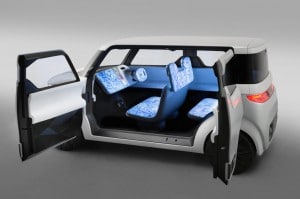 (Nissan Gripz concept previews next Juke CUV. Click Here to check it out.)

“What moves these digital natives is capturing experiences in photos and videos and sharing them. Friends respond with `likes’ and share the experience further. What’s important is not whether something is experienced personally or virtually. What matters is the process of sharing.”

Think of the interior as a sort of clean canvas. Its loaded with reconfigurable displays. When driving, they project the necessary gauges and instruments. But when parked, the screens focus on connectivity, displaying everything from social media links to videogames — backed up by “top quality sound.” There are screens on the exterior, as well, to share moments with passersby.

(Click Here to see what Honda is bringing to this year’s Tokyo Motor Show.)

Even in driving mode, the displays can be customized, to reflect the seasons, for example, or the mood of the driver.  And there’s the requisite onboard camera to share one’s driving experience with friends.

The idea of turning a vehicle into a mobile display isn’t entirely unique. Several other manufacturers have toyed with the concept in recent years, though the latest in display, camera and infotainment technologies make it easier to pull off now.

The Nissan Teatro for Dayz concept will be just one of many extreme show cars to debut at this year’s Tokyo Motor Show, barely three weeks from now. The event has built a reputation for blending the wild, weird and wacky with more conventional automotive products. Honda, for example, plans to show off a mix of vehicles ranging from the Wander Walker — which looks like a wheeled phonebooth — to the Civic Type R.

(The return of the Mazda rotary RX? Click Here to find out.)

On the more serious side, Mazda says it will be launching an all-new sports car model at the Tokyo Show. It’s expected to bring back the maker’s once formidable RX line, and may also mark the rebirth of Mazda’s once trademark rotary engine.