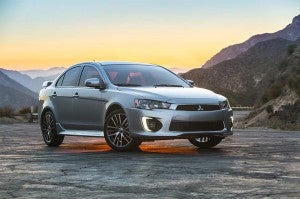 Mitsubishi may be dropping its street racer, the Lancer Evolution, but it will be back for 2016 with an updated version of the sedan.

The new model will get a number of modest upgrades, including new LED accents, but it will also see a $200 increase in its starting price, according to the small Japanese automaker.

Mitsubishi has announced plans to put its primary emphasis on sport-utility vehicles, like the recently redesigned Outlander. But the return of the Mitsubishi Lancer for 2016 shows it isn’t abandoning the passenger car segment entirely.

That may be small consolation for fans of so-called “rice rockets,” among which the Mitsubishi Lancer Evolution has long been a popular option. The maker couldn’t financially justify updating the old model, senior officials recently told TheDetroitBureau.com.

Also going away: the Lancer Ralliart, which had slotted in-between the Evo and the standard Lancer line-up. It was distinguished by its turbo enginer, dual-clutch gearbox and more sporty styling.

So, it’s back to basics for the 2016 Mitsubishi Lancer, but the maker doesn’t want potential buyers to think of the sedan as just another econobox. In fact, the base model will now start at $18,405, a jump of $200. But even that entry model has some noticeable upgrades.

(Mitsubishi one of many automakers staging debuts at 2015 LA Auto Show. Click Here for more.)

The basic exterior design remains the same, but the front bumper gets a bit bolder treatment, including new vertical LED accents. There are new mirrors with integrated turn signals, and optional new 18-inch wheels.

Inside, USB connectivity is now standard, as is an LCD information display in the gauge cluster, and a display audio system. Buyers also can opt for a touchscreen-based infotainment system.

While there’ll be less emphasis on extreme performance, the 2016 Mitsubishi Lancer will offer more options to purchase all-wheel-drive, now available even on the base ES grade.

The powertrain lineup now features a CVT borrowed from the new Outlander. But the two engine options are carry-over, including the 148-horsepower 2.0-liter inline-four and the sportier 168-hp 2.4-liter engine.

(Click Here for a review of the 2016 Mitsubishi Outlander.)

Load everything up and the 2016 Mitsubishi Lancer will top out at around $25,000 plus destination charges.

Mitsubishi has become an also-ran in the U.S. passenger car market. Whether the updated Lancer will build momentum remains to be seen, but with both Ralliart and Evolution gone, it will be an even bigger challenge for the maker to stand out in a crowded field of compacts.

(Mitsubishi abandoning US assembly plant. Click Here for the story.)