Honda First to Blink as Chinese Market Slows Down

Japanese maker delaying construction of $822 mil plant; others could follow. 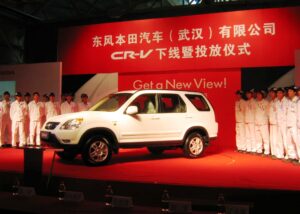 Honda put the brakes on construction of a proposed plant with Wuhan, which already makes the CR-V in China, due to the sluggish market there.

Automakers from around the world have been flooding the Chinese market with new products – and the plants to build them. But with the long boom in Chinese auto sales suddenly running out of momentum, automakers may be rethinking their investment options.

Honda certainly has. The Japanese maker says it will delay construction of an $822 million assembly plant it was planning to build in Wuhan – which would have been its third factory run in partnership with China’s domestic maker, Dongfeng Motor Group.

For now, Honda still intends to eventually go ahead with the plant, but even a temporary delay comes as a sign that the industry is questioning assumptions about just how big the market will grow – and how soon.

“Our current stance is to carefully study the market conditions,” Teruhiko Tatebe, a Honda spokesman, told the Wall Street Journal.

The Chinese car market has been one of the world’s fastest-growing since the turn of the new millennium – approaching triple-digit growth in some years – and is now the largest automotive market, outstripping the U.S. despite the American recovery.

But with the Chinese economy slowing down to a growth rate of around 7% this year – with some skeptics contending the government is even then overstating the numbers – the car market has also taken a tumble.

For the first nine months of 2015, sales climbed a mere 2.8%, down from a 10% increase the previous year. Worse, sales dropped three months in a row through August – to a 17-month low, despite widespread price-cutting — and the situation doesn’t appear likely to improve in the near-term, analysts warn.

Some of the market’s leaders have been hit hard, including both Volkswagen AG and General Motors, the Detroit maker reporting a 4.2% dip for the third quarter there.

Japanese makers, in general, have faced a particularly difficult struggle in China in recent years, in part due to ongoing political strife between the two countries.

Honda actually outperformed the Chinese market with a nine-month gain of 34%, but for now, at least, “We can manage with our current capacity,” said spokesman Tatebe.

Honda has yet to decide how to proceed with the plant in Wuhan, which is located in Hubei province, in the central part of China. The facility, which would add capacity of as much as 240,000 vehicles annually, may be delayed several years, though a report by Japan’s daily newspaper, Nikkan Kogyo Shimbun, claims the project will be scrapped all together.

The Chinese government is sending signals it may help spur the market. It recently enacted tax cuts on vehicles with smaller, less polluting engines, for one thing. That said, a growing number of major cities, starting with Beijing and Shanghai, have enacted limits on new vehicle registrations in a bit to reduce both pollution and worsening traffic problems.

While Honda may be cutting back, some other manufacturers continue pushing ahead. Among them is Ford, the Detroit automaker still racing to make up for its late start in the Chinese market. And Fiat Chrysler this month began production at a Jeep plant after a protracted effort to return to the market.

Jeep was the first major foreign brand to produce vehicles in China, more than a quarter century ago. But it pulled out of its Beijing plant following the break-up of the ill-fated DaimlerChrysler.