More reasons to plug in as Chevy does a ground-up on its extended-range electric vehicle. 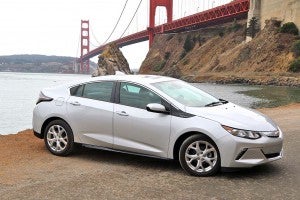 The 2016 Chevrolet Volt gets a new look, a new powertrain, and more range and power.

Few recent product launches have sparked more interest than the debut of the original Chevrolet Volt, the world’s first mass-market plug-in hybrid. But after an initial flurry of sales, demand has sharply slackened off. The question is whether Chevy can charge things back up as it launches an all-new version of what it prefers to call an “extended-range electric vehicle.”

Coming barely a half-decade after the debut of the original model, one might have expected this to be a modest, mid-cycle update. But the 2016 Chevrolet Volt is a ground-up makeover, something that’s apparent from the first quick glance. It becomes even more obvious when you slip inside and hit the Start button. About the only thing carried over is the goofy sound effect sequence that tells you it’s ready to roll.

By the numbers, there’s more to like: the 2016 Volt not only squeezes in another passenger but also squeezes out 40% more range on battery power alone – now an EPA-estimated 53 miles. By Chevy’s accounting, most owners are now likely to clock as much as 1,000 miles before they have to fill up the gas tank feeding the range-extending I-4 engine – which is also new on the ’16 model.

A big question is timing: the 2016 Chevrolet Volt comes to market at a time when gas prices are about as cheap as they’ve been at any time over the past decade, a situation that’s made it difficult to sell just about anything with a battery, from conventional hybrids like the Toyota Prius to pure battery-electric vehicles like the Nissan Leaf. 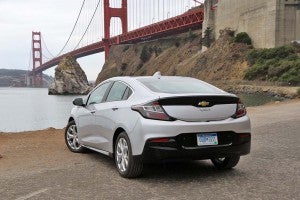 The new Chevrolet Volt retains the original plug-in's five-door design, but with a less geeky look.

That said, the crisis triggered by word Volkswagen cheated on diesel emissions tests could convince some green-minded buyers to shift from diesel to battery, especially if they can get a little more of the performance bonus “oil-burners” normally offer. While the new Volt is no rocket, it’s cut almost a second off its launch times, rated by Chevy at 8.4 seconds 0 to 60 and just 2.6 seconds to 30.

(The moment of truth for Tesla as it launches Model X battery SUV. Click Here to check it out.)

From a visual standpoint, Chevy shifted gears, er, plugged into a different socket this time. The original Volt followed the Toyota Prius formula, opting for a distinctive, if somewhat quirky, exterior shape meant to be immediately recognizable rolling quietly down the road. The new Volt retains its hatchback package but is much less of a visual standout – or eyesore, to some. It is a more attractive, if somewhat more anonymous vehicle this time.

It’s also a bit more upscale in appearance, both inside and out. 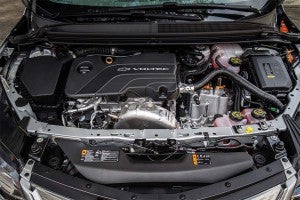 The new drivetrain gets a higher-power battery, and a new range-extending gas engine.

The original Chevy Volt wasn’t intended to look cheap. It just worked out that way. The design team was openly influenced by one of the hottest new technologies of the day, the then relatively new Apple iPhone. Among other things, they opted for a virtually button-less instrument panel that introduced the concept of haptic design. Touch a virtual control and it gave you a little kick in response. That’s great on the latest smartphones, another matter on a bouncing baby automobile.

They also opted for the same, glossy white plastic that worked wonderfully on an iPhone case but looked just plain cheap and gaudy inside an automobile. The plastic is gone from the 2016 Chevy Volt, (which may or may not explain why Toyota has oddly opted to plaster the same material all over the center console and stack of the 2016 Prius).

No, you won’t confuse the ’16 Volt for one of the new luxury plug-ins coming from the likes of Mercedes-Benz, BMW, Audi, or even sister GM brand Cadillac. But it’s a much more well-executed and reasonably upscale interiors – perhaps reflecting a shift in spending as Chevy spends less on the powertrain, battery prices falling sharply over the last six years. 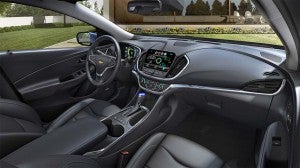 The 2016 Chevy Volt's interior is more refined -- and it now has room for five passengers.

The battery pack in the 2016 Chevrolet Volt is both larger and smaller than before. It now has a capacity of 18.4 kilowatt-hours, up from 17.1 kWh on the last version of the Gen-1 plug-in, and 16.5 kWh on the original model. At the same time, LG Chem, the Korean battery supplier, has managed to squeeze those extra electrons into a smaller physical package. Eliminating the large hump dividing the backseat now means it can hold three adults, albeit snugly.

We’ve largely interchanged the terms, “plug-in hybrid,” and “extended-range electric vehicle.” The latter is basically a battery-electric vehicle with an onboard generator that can fire up when the lithium-ion cells are fully discharged. The original Volt cheated a bit, engineers allowing the drivetrain to steal a little direct torque from the internal combustion engine during hard acceleration. The Gen-2 Volt can siphon off even more power, one reason for its improved acceleration.

The battery and drive are also lighter, the overall 200 pounds lower mass of the 2016 Volt improving both range and mileage, as well as performance. 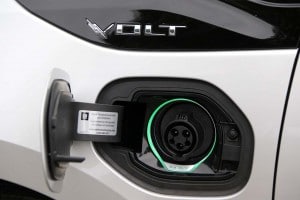 The new battery pack can charge in as little as 4.5 hours - but it can't use quick chargers.

Under normal conditions the heavy lifting is done by a new twin-electric motor system making 111 kilowatts of power. When needed, the new Volt fires up an inline-four displacing 1.5 liters. That’s up from 1.4 liters before, though the physical package of the now directed-injected engine is slightly smaller.

The new gas engine peaks at 101 horsepower – the combined driveline making 149-hp and 294 lb-ft of torque –and it does so on regular gasoline. The requirement for premium fuel was one of the most common complaints about the original Volt.

Chief Engineer Andy Farrah and his team also addressed another frequent frustration: the old engine’s noise and vibration, which could be downright annoying at times.

During a lengthy drive around California’s Marin County that included highways, urban stretches and back roads, we found the new gas-electric powertrain to be delightfully smooth and quiet. We had to watch carefully to be sure when the 1.4-liter I-4 fired up, in fact, as the battery range meter dropped to zero miles.

By and large, the drivetrain was surprisingly quiet – with an occasionally exception. Under a few situations where we demanded hard acceleration we were rewarded with an odd droning and the sort of rubber-banding effect common with vehicles using CVTs rather than step-gear transmissions. But such occasions were few and more than tolerable.

While we weren’t driving as hard as the new plug-in might manage, we weren’t exactly hyper-miling, which made it all the more impressive to see the 2016 Chevrolet Volt run for just over 50 miles before the battery charge ran out. After that, it managed to deliver something in the range of 40 mpg. That translated into our using less than 1.5 gallons of gas over a 100-mile drive. On a less challenging route, we’d not be surprised if the Gen-2 model got something in the mid-40 range.

From the time the first Volt was introduced, Chevy has insisted most owners would not wind up using much gasoline, even the shorter battery range of the original model expected to cover most daily commutes in the U.S. Clearly, the number of buyers who will fall into the electric-only mode category should now grow.

Despite the larger battery, charging times on 240-volts will remain about 4.5 hours, though using a household 110-volt outlet will require a bit more time, at 13 hours. Disappointly, no Level III charging is possible right now, but Farrah said an update could come mid-lifecycle.

The 2016 Chevrolet Volt will start at $33,995 – which includes $825 in delivery charges – compared to $35,170 for the old model. Buyers can take advantage of $7,500 in federal tax credits, and additional credits are offered in California and a number of other states.

At a price in the mid- to high-$20,000 range, the 2016 Chevrolet Volt becomes a competitive package, even before you start factoring in fuel cost savings. (And does anyone really believe $2 gas is here to stay?)

The second-gen 2016 Chevrolet Volt is a more mature, more attractive and, yes, more fun-to-drive vehicle that has a lot of advantages over key competitors such as the Ford Focus Energi and more conventional Toyota Prius Hybrid. It just may be the sort of re-make that will charge up the market for plug-based vehicles.