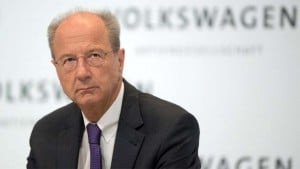 VW is expected to formally name Hans Dieter Poetsch as its new chairman this week.

The company has halted sales of some of its most popular product lines and already set aside more than $7 billion, but that’s likely only the beginning of the problems facing Volkswagen AG as it struggles to deal with a scandal triggered by the revelation it knowingly cheated on diesel emissions testing.

The situation is serious enough that new VWAG Chairman Hans Dieter Poetsch is warning it could be an “existence-threatening crisis for the company.”

According to the U.S. Environmental Protection Agency, VW sold 482,000 vehicles equipped with a so-called “defeat device” in the U.S., the maker acknowledging the suspect software was installed on 11 million vehicles sold worldwide over the last seven years. The disclosure has triggered a flood of class action lawsuits, potential criminal investigations and even a claim filed by Harris County, Texas for $100 million due to the potential environmental damage the cheating may have caused.

The 64-year-old Poetsch has been working in the auto industry since 1979, initially at BMW. He was named to the Volkswagen Supervisory Board in 2003, and six years later became the maker’s chief financial officer. He was expected to be promoted to chairman at a board meeting next month, but the emissions scandal has sent VW into crisis mode and he will be formally promoted at a special meeting now scheduled for this Wednesday.

(VW diesel scam could be having a deadly impact on public health. Click Here for the full story.)

Poetsch will oversee a management team that is still undergoing a shake-up following the resignation of CEO Martin Winterkorn last month, as well as the suspension of a number of other senior executives tainted by the scandal.

Poetsch not only will have to manage the personnel crisis – an internal investigation expected to bring even more changes – but shore up Volkswagen’s finances at a time when it could be facing billions of dollars in fines and penalties. The automaker already has set aside 6.5 billion euros, or $7.3 billion, to cover the anticipated costs, but observers generally agree the price tag will go significantly higher.

On Monday, the latest in a growing list of class action lawsuits was filed against the automaker, this one in U.S. District Court in New Jersey.

“This was a sophisticated, far-reaching fraud scheme that, in addition to violating numerous laws, defrauded Volkswagen’s customers,” said Adam Levitt, of law firm Grant & Eisenhofer. “Volkswagen charged substantial premiums for vehicles that boasted ‘clean’ and ‘green’ diesel technology.  We believe that the fraudulent conduct damaged consumers to the tune of billions of dollars in…what is arguably the most egregious automotive fraud in U.S. history.”

(Congress to hold hearing on VW emissions scandal. Click Here for the latest.)

The crisis couldn’t have come at a worse time for the German maker which just this year overtook Toyota to become the world’s best-selling automaker. VW intended to firm up its lead by launching an array of new products under more than a dozen different brands. And it has been investing heavily in alternative powertrain technology to build its reputation for clean vehicles.

But company insiders now fear VW will have to sharply cut back on the 100 billion Euro, or $112 billion in investments planned through 2018. There has been widespread speculation VW might even have to sell off one or more of its brands. The maker hasn’t addressed those concerns but did warn investors earnings will all but certainly dip in the coming months. Key ratings agencies, including S&P, Moody’s and Fitch, have all warned VW could be facing a downgrade.

In his interview with Germany’s Welt am Sonntag, Poetsch said he believes Volkswagen will be able to steer through the crisis. But that will depend, ultimately, on keeping potential buyers from defecting in large numbers.

Mike Jackson, CEO of AutoNation, the largest U.S. automotive retailer, told TheDetroitBureau.com that floor traffic at the chain’s VW showrooms has fallen sharply, a situation echoed by other dealers.

A new survey by KelleyBlueBook found 53% of the Americans polled saying they had “complete” or “general” mistrust of the VW brand in the wake of the scandal. And 58% said they aren’t sure VW is properly addressing the problem.

“Volkswagen can fix the mechanical problems and make reparations to owners, but winning back the confidence of shoppers and loyal buyers will be a daunting challenge that could take years to overcome,” said Michelle Krebs, an analyst with AutoTrader.com.

VW’s new CEO Winfried Wahland last week said he expects to soon announce a fix for VW vehicles sold in Europe. The situation is likely to take longer to resolve in the U.S., where diesel emissions standards are among the world’s toughest.

Until then, vehicles equipped with the maker’s WA 189 2.0-liter diesel – including such models as the VW Passat TDI and Audi A3 TDI – will have to sit on dealer lots. Considering diesels accounted for 25% of VW of America’s sales in 2014, that alone will have a serious financial impact.

(Why will it take so long to fix VW’s diesels in the U.S.? Click Here to find out.)