Declines to elaborate on the role that tech behemoth will play. 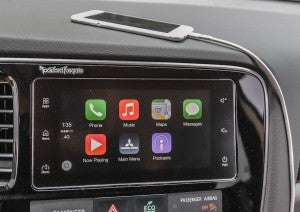 Apple CEO Tim Cook talked about how the auto industry will change in the future, but limited details about Apple's role in to CarPlay.

Apple’s top executive is predicting that the automobile industry is on the cusp of massive change.

Tim Cook, Apple chief executive officer, said this week that the automotive industry is on the edge of sweeping change during a conference sponsored by the Wall Street Journal, but he declined to say if the world’s most valuable company by market capitalization would play a role in that transformation.

Cook detailed the factors changing the automobile business, including the growing importance of software in the car of the future, the rise of autonomous vehicles and the shift from an internal combustion engine to electric-powered vehicles.

“It would seem like there will be massive change in that industry, massive change,” Cook said on Monday night at the Wall Street Journal’s WSJDLive conference at The Montage resort in Laguna Beach, California. “You may not agree with that. That’s what I think.”

Cook declined to respond to published reports that Apple is developing an electric car that might hit the road as soon as 2019. Cook said that, in the short term, Apple is working to bring the “iPhone experience” to the vehicle through CarPlay, its in-dash system that creates a way for users to access their iTunes music collections or get driving directions from its mapping software without touching their phones.

“We’ll see what we do in the future,” Cook said, leaving open the tantalizing prospect of more. “I do think that the industry is at an inflection point for massive change.”

Art Wheaton, an automotive expert and senior extension associate with Cornell University’s ILR School, says Apple has the financial resources to be successful, but would face many obstacles attempting to be a mass-market automaker.

“The auto industry is incredibly expensive and difficult to begin a start up. Apple has the financial resources to be successful, but does it really anticipate building entire vehicles?

(Click Here for details about GM, LG working together to bring Bolt EV to market.)

“Apple could have competency in autonomous car software, but large scale auto manufacturing is no picnic. Many smaller electric car companies have failed, along with major car companies successful in other parts of the world that were not able to crack the U.S. sector.

“Google has a head start on autonomous vehicles but would face many of the same obstacles attempting to be a mass-market automaker,” Wheaton said.

However, Tesla, founded by Silicon Valley entrepreneur Elon Musk, has succeeded in making electric vehicles that are now sold across the United States. Tesla also is experimenting with autonomous-driving software, which it put on display for the first time earlier this month.