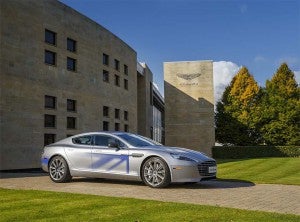 Aston hopes to bring a production version of the RapidE battery car to market as early as 2017.

At first glance, you might mistake it for an “every day” Aston Martin Rapide S, if one could apply such a term to a $200,000 sports car capable of launching from 0 to 60 in barely 4 seconds.

But this was no ordinary Aston rolled out for a special tour given an entourage of British royalty, Chinese President Xi Jinping along for the trip. The first hint? A distinct lack of that guttural roar one expects from an exotic supercar. In this case, it was more like a mechanical purr.

A closer look at the badge on the concept vehicle offered a hint of the key difference, rather than using a gas-powered engine to pump out 552 horsepower, the Aston Martin RapidE prototype relies on a new all-electric drivetrain.

And before you write it off as just another fanciful show car, note that Aston CEO Andy Palmer has made it very clear the British marque plans to add an electric drivetrain to its line-up in the near future.

“The exciting RapidE concept tangibly demonstrates the capability and ambition of Aston Martin towards developing low- and zero-emission sports cars,” said Palmer, at the company’s headquarters in Gaydon, about 90 miles northwest of London. “”We see luxury electric vehicles as an intrinsic part of our future product portfolio.”

(What’s the greenest car on the market? Click Here to check out the five finalists for Green Car of the Year.)

Aston’s recent interest in electrification is less of a surprise when one realizes Palmer was a key proponent of battery technology in his previous job as global product chief for Nissan Motor Co. But that’s not the entire story.

Even small and exotic manufacturers like Aston Martin have to cope with ever-stricter global emissions and fuel economy standards, and battery technology may be the only solution. The good news is that batteries are becoming smaller, lighter, more energy-dense and less expensive. And electric motors, given enough juice, can turn out remarkable amounts of tire-spinning torque.

Tesla recently announced the so-called “Ludicrous Mode” option for its Model S sedan, capable of launching the battery-car from 0 to 60 in less than 3 seconds. Other luxury makers, including Audi and Mercedes-Benz, are working up all-electric performance models, while the market will see a flood of upscale plug-ins before the end of the decade.

(Audi electrifies with e-tron Quattro concept. Click Here to check it out.)

Aston intends to launch a production RapidE as soon as 2017, at a price of around $250,000 – a premium over the gas model, and about twice the cost of the highest-performance Tesla Model S. The British electric is expected to make 560-hp and enormous torque that should match the performance of the current gas model. It also is planned to get 200 miles per charge, a bit less than the Tesla.

Aston also is working on an all-wheel-drive version. It would need to drive all four wheels considering it’s expected to thrust out as much as 1,000-hp.

Aston is betting it could sell as many as 400 RapidE battery-cars annually, a quarter of them in the U.S. – with California likely to absorb the majority of those, as it does the Tesla Model S.

The decision to show off the RapidE during a leg of Chinese leader Xi’s visit to Britain was no accident. During the visit, noted a company statement, Aston and “ Chinese investment group, ChinaEquity, announced an agreement to explore the development of a production version.” 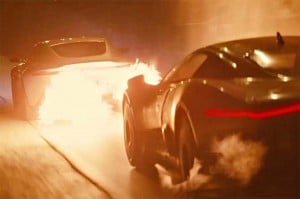 Superspy James Bond will still be driving a gas-powered Aston Martin DB10, complete with flamethrowers in the new film, "Spectre."

For his part, ChinaEquity Chairman Chaoyong Wang said, ” We are excited to participate in the development of the RapidE and to make a contribution to Sino-British clean energy and green environmental strategy. We feel confident that there are significant opportunities for electric cars in China and the world.”

Plagued by endemic air pollution, Beijing’s government has been pressing the auto industry to launch more battery-based vehicles. And the RapidE would likely be exempt from current limits on the number of vehicles that can be registered in key cities like Beijing and Shanghai each month.

It remains to be seen, of course, whether traditional Aston buyers would welcome a battery model. That includes the maker’s most famous advocate, superspy James Bond. He’ll showcase a one-off Aston Martin DB10 GT for use in the new 007 film, “Spectre,” and along with a flamethrower and other tricks, it will feature a very traditional gasoline engine.