American buyers may have to wait. 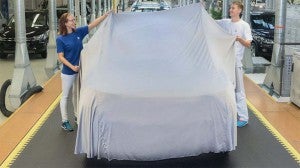 VW teases the next-generation Tiguan before it debut at the Frankfurt Motor Show.

Volkswagen isn’t quite ready to pull the covers on its next-generation Tiguan, as this teaser shot shows, but it is getting ready to unveil a new version of the crossover-utility vehicle at the Frankfurt Motor Show in just a little over a week’s time.

The CUV clearly could use a makeover, especially if VW hopes to regain some momentum in the U.S. market where its lack of competitive offerings in the utility vehicle segment has been a big problem. Unfortunately, word has it that the next Volkswagen Tiguan may not reach American showrooms for as much as a year after it launches in Europe.

Once it does arrive, buyers should find a VW Tiguan that is slightly larger, more powerful and loaded up with a variety of new features, especially in the form of connectivity and safety technologies.

According to a teaser blurb from Volkswagen, the first of the new Tiguans has already rolled off the assembly line at the maker’s headquarters assembly plant in Wolfsburg, Germany.

Some spy shots that have been circulating in recent weeks appear to confirm that the made-over Tiguan will show the strong influence of two recent concept vehicles, the CrossBlue and the CrossCoupe. Under the skin, meanwhile, the next-gen VW Tiguan will share the modular MQB architecture used for the Volkswagen Golf and a number of other new models.

By some reports, the new Tiguan could grow by as much as 10 inches overall, a move that would allow for a less cramped cargo compartment and perhaps a third row of seats. According to some early reports, that cargo bay will grow to 17.6 cubic feet with all seats up, compared to the current 13.9 cf.

The good news is that the larger Tiguan may not necessarily be a heavier one. The new MQB platform allowed the VW Golf to grow a fair bit while still slashing hundreds of pounds in mass.

(Click Here for more on the new Infiniti Q30 coming to Frankfurt next week.)

Power is expected to come from a variety of gas and diesel engines worldwide, with a turbocharged 2.0-liter package the primary powertrain for the American market. There also is expected to be a new Tiguan R model using a 300-horsepower engine shared with the Golf R.

Yet to be confirmed: whether the new Tiguan will be the latest VW model for the States to offer a diesel option. And no word – yet – on whether the German maker might offer some sort of hybridized powertrain package.

Look for six-speed manual and 7-speed DSG transmission choices, as well as VW’s familiar 4Motion all-wheel-drive system as an option.

One reason for the apparent delay in jumping the Atlantic is that VW is in the midst of expanding its factory in Chattanooga, Tennessee, where the American model will be produced – along with two other crossovers based on the CrossBlue and Cross Coupe.

(Click Here for our picks for the LA Auto Show’s hottest debuts to come.)