Pedal to the Metal as Porsche Fires up New 911 Carrera

Porsche's new 911 Carrera takes what the company learns on the racing circuit to make the production model faster.

Automakers invest heavily in racing, often with questionable results – but for Porsche buyers, the payoff will become apparent as the German maker rolls out the new 911 Carrera at the Frankfurt Motor Show.

The twin-turbo technology used to boost the performance of the new sports car’s 3.0-liter flat six comes directly off the track, the maker explains, giving the latest-generation Carrera a hefty 20-horsepower boost. That was enough to help it pull a full 10 seconds off the lap time of the previous Carrera S on the North Loop of the Nurburgring.

The new Porsche 911 Carrera starts out getting a number of visual updates, including new headlights with four-point LED daytime running lights, a revised rear deck lid with vertical louvers, and new taillights. Inside, the Carrera gets a totally redesigned infotainment system. 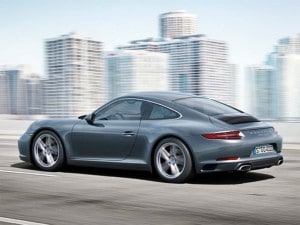 The new 911 Carrera S is 10 seconds faster around the Nurburgring than its predecessor.

But it’s the added performance offered by the new powertrain that is likely to bring buyers into the showroom.

The 3.0-liter engine in the standard Carrera now makes a full 370 hp and 311 pound-feet of torque. The Carrera S bumps that up to 420 hp and 368 lb-ft thanks to the use of the new track-derived twin-turbo system with its modified compressor wheels, unique exhaust system and revised tuning.

That allowed the 911 Carrera S to run the ‘Ring in a mere 7 minutes and 30 seconds, beating its predecessor by 10 seconds.

Despite the boost in performance, Porsche says it expects to deliver as much as a 12% boost in fuel efficiency when the final numbers are calculated.

(Porsche on a mission to electrify with 600-hp battery sports car. For more, Click Here.)

As for the optional rear-axle steering system available for the Carrera S, Porsche notes it is “adopted from the current 911 Turbo and 911 GT3. It further enhances the turn-in behavior of the 911. Additionally, it increases driving precision when changing lanes at higher speeds.”

Even at slower speeds, the system has its benefits, improving maneuverability in city traffic, trimming the turning radius of the Carrera S by 1.6 feet.

(Click Here for more on the Audi e-tron Quattro concept.)

The new Carrera also will be offered with an optional electro-hydraulic lift system integrated into the front axle struts. Touch the button and the system increases ground clearance at the front axle by almost two inches, something Porsche claims is “particularly useful when clearing speed bumps or steep driveways.”

The new Porsche 911 Carrera will add an updated Porsche Communication Management System, the infotainment package now able to recognize pinch and other smartphone-style commands, while also pairing up with your iPhone through the new Apple CarPlay technology.

Look for the new Porsche 911 Carrera and Carrera S to roll into showrooms next March. Prices will start at $89,400 for the base 911 Carrera coupe, to $115,700 for the Carrera S Cabriolet. Of course, the typical transaction price will go up substantially thanks to the wide range of accessories and packages Porsche buyers typically opt for.