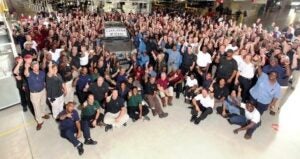 Mercedes-Benz Tuscaloosa, Alabama, plant is going to get a chance at 2 million SUVs as the maker is expanding capacity there.

Mercedes-Benz is expanding production of sport utility vehicles in the U.S. and will create 300 new jobs over the next couple of years at its plant in Tuscaloosa, Alabama, to meet rising customer demand for the utility vehicle in the luxury market.

“In the next years we’ll invest $1.3 billion into the expansion of our SUV production and turn the Mercedes-Benz plant Tuscaloosa into a high-tech location,” says Markus Schäfer, member of the Divisional Board Mercedes-Benz Cars, Manufacturing and Supply Chain Management.

“In this way we can produce the next SUV generations even more flexibly, efficiently and in proven top quality,” he said.

Schäfer also said the Mercedes-Benz plant in Tuscaloosa will also assemble the next-generation SUV, including the hybrid versions.

The overhaul of the Tuscaloosa plant will include construction of a new body shop, which suggests the German automaker is preparing to use more aluminum in its future vehicles. Vehicles with aluminum bodies are held together by adhesives rather than by the welds used to fashion a car body made of steel components.

The SUV Assembly Shop will also undergo renovation, as well as the plant’s logistics and IT systems and networks.

State-of-the-art technologies and an end-to-end digitization of production processes to enable a highly flexible production system for the maker.

Schäfer noted as part of the global production network, Tuscaloosa is connected to all Mercedes-Benz Cars locations around the world, allowing a location independent access to data and process management.

Jason Hoff, president and CEO of Mercedes-Benz U.S. International in Tuscaloosa, said every single installation and every robot, for example, can be controlled and updated with new software programs. Big Data applications will be used for intelligent analyses and for an improvement of the production processes, Hoff said.

“With this expansion and modernization of our plant, we will create 300 new jobs and continue the success story of Mercedes-Benz in Tuscaloosa,” Hoff added.

“Our entire team is proud to reinforce the State of Alabama’s growing reputation as a leader in high-quality automotive manufacturing.”

The new 1.3-million square foot addition will include the latest lightweight technologies with innovative joining processes and employ a modular approach to manufacturing.

MBUSI’s current SUV Assembly Shop will be expanded by 13,000 square meters and receive a larger, more flexible “marriage” station, where the body is merged with the powertrain, allowing for production of a wider range of vehicles.

The Tuscaloosa plant, or MBU.S. International, was the first assembly plant for passenger vehicles built in Alabama and began production in 1997.  So far, Mercedes-Benz has made a $4.5 billion capital investment in the Tuscaloosa operations, which is now building the third generation GLE or M-Class. The plant added production of the R-Class in 2005, the GL in 2006, and the new C-Class sedan for the North American market in 2014.

During August, production of R-Class vehicles migrated to the U.S. contract manufacturer AM General in Mishawaka, Indiana, to free production capacities to be used for the SUV series. The latest expansion is geared towards the next SUV generations including the hybrid versions.

(To see more about Daimler and Nissan/Renault partnering with FCA, Click Here.)