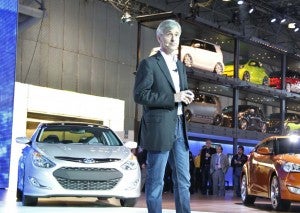 Formerly CEO of Hyundai Motor America, Krafcik is the latest in a series of moves by tech companies, like Google and Apple, to bring on experienced automotive execs as the companies move closer to production on their own cars.

Before joining Hyundai, he worked for Ford Motor Co., primarily in product development where he worked on the company’s single most important vehicle, the Ford F-150 pickup truck.

Krafcik joined Ford after serving on the team at the Massachusetts Institute of Technology that compiled a famous study of the U.S. auto industry and introduced the term lean production to American business.

He was named “Automtive Executive of the Year” in 2013 only months before he was released by Hyundai and took over the job as president of the car buying website, TrueCar.

For Krafcik, the return to the Bay Area is something of a homecoming.  Krafcik started his automotive career in the Bay Area at NUMMI plant in Fremont, California, now occupied by Tesla.

“Over the last few years, we’ve made more progress with our self-driving car technology than we ever thought possible,” Google executives said in announcing the news, noting the company’s test fleet has logged more than 1 million miles of autonomous driving on public roads near its headquarters in Mountain View, California, and more recently in Austin, Texas.

“We’ve taught the car to drive on city streets, navigating the delicate dance of pedestrians, cyclists and other vehicles,” the company said in a news release. “We’ve even built a vehicle that we hope could someday take anyone from point A to point B at the push of a button.”

Krafcik takes over the project as the team works to better understand public perception of self-driving cars and how they will use them in their daily lives. Google is moving from equipping conventional cars for testing to designing and building its own fleet of driverless cars for evaluation.

“This is a great opportunity to help Google develop the enormous potential of self-driving cars,” Krafcik said in a statement. “This technology can save thousands of lives, give millions of people greater mobility and free us from a lot of the things we find frustrating about driving today. I can’t wait to get started.”

Many automakers have developed semi-autonomous cars; few are actively pursuing fully autonomous as a solution in the near term. However, the National Transportation Highway Safety Administration supports the development of autonomous driving technology as the means to the next leap in improving safety.

The Google test fleet is now driving 10,000 miles a week in California, and Texas, with plans to run pilot programs with the new self-driving prototypes being engineered and built near Detroit.