Forget the Sound Barrier, Bloodhound SSC is Aiming at 1,000 MPH

Jet/rocket package will produce the power of 180 Formula One racers. 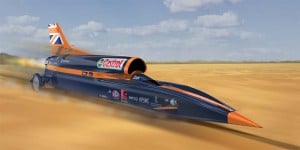 A rendering shows the Bloodhound SSC as it races from 0 to 1,000 mph in just 42 seconds.

When RAF fighter pilot Andy Green hits the “start” button on the new Bloodhound SSC, he’ll fire up a 550-horsepower V-8 borrowed from the Jaguar F-Type sports car. But it will take a lot more than that to get the Bloodhound moving.

The big V-8 is simply there to pump fuel into the 42-foot-long, pencil-shaped Bloodhound’s EJ200 jet engine. When Green opens the throttle up, he will quickly be thrust deep into his cushioned seat as the jet, developed for the Eurofighter, quickly hits about 300 mph. But at that point, it’s only warming up.

At that point, a cluster of hybrid solid/liquid rockets will ignite, and if all goes according to plan, Andy Green will soon be moving at 1,000 miles per hour, or nearly a third faster than the land speed record he set in 1997, when he piloted the Thrust SSC to 763 mph, becoming the first man to ever drive through the sound barrier.

As with the Thrust, the man behind the Bloodhound Project is Richard Noble, a 69-year-old Scotsman who himself held the world land speed record from 1983 to 1997, when Green blasted his way into the history books. 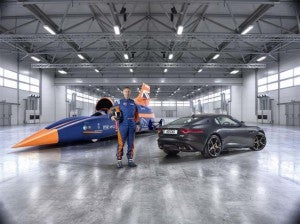 RAF pilot and Bloodhound driver Andy Green with the supersonic car and a Jaguar F-Type.

The Bloodhound is a very British project, with support from the Ministry of Defence, which supplied a spare EJ200 jet engine. Jaguar, beyond its financial support, kicked in the big V-8. The four hybrid rocket engines also have a British origin, emerging from a British military cruise missile program.

The rockets are powered by an unusual blend of solid and liquid fuels. The design makes it easier to operate than a pure liquid design, while also offering the ability to throttle them up or down, something normally not possible with a solid rocket. In essence, hydrogen peroxide is broken down and mixed with a synthetic rubber compound to produce gobs of thrust once the Bloodhound hits 300 mph.

All told, the rockets and jet produce about 135,000 pounds of thrust, which Noble suggests is the equivalent of 180 Formula One race cars. When the Bloodhound SSC hits its top speed it will cover a mile in about 3.6 seconds. 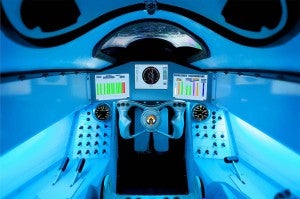 The cockpit of the Bloodhound SSC.

Getting up to that speed requires more than just thrust. The Bloodhound required immense amounts of work on its aerodynamics. Unlike an airplane or rocket, designers had to keep it pressed firmly down onto terra firma, and they needed to minimize drag. That was a key reason why they abandoned the two-jet design of the Thrust in favor of a jet/rocket combination. It requires only a single air intake.

One of the biggest challenges, as with a supersonic jet, has been to ensure stability as the Bloodhound brakes the sound barrier. Because of the way air flows around various parts of the car, different parts will go supersonic before others, a recipe for trouble.

In some ways, launching the Bloodhound will be the easy part. Noble’s team spent plenty of time figuring out how to stop the car. As the engines are cut, and wind and rolling resistance bring it down to around 800 mph, air brakes will be deployed. Green will only begin to apply Bloodhound’s disc brakes when he’s slowed to 250 mph.

Green himself will experience about 2.5 Gs – or 2.5 times the force of gravity – as he accelerates to 1,000 mph in about 42 seconds. Compared to what he’s used to in a fighter jet cockpit, however, that’s actually a rather modest number. Decelerating will produce slightly greater forces, or about 3 Gs.

Might it be possible to nudge even faster with a successor to the Bloodhound? “We think this is about as fast as it is possible to go,” Noble told IBTimes, “but we’re probably wrong, we thought that last time.”