Could move signal return of the midsize pickup to US? 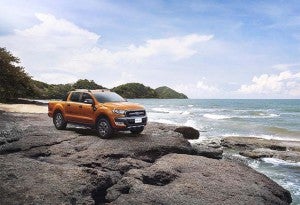 The Ford Ranger Wildtrack bumps the midsize pickup into a higher level of refinement.

Ford is going wild as it prepares to launch an updated version of its midsize Ranger pickup in Europe. Make that Wildtrack, a new version of the truck making its debut at the Frankfurt Motor Show this week.

The unveiling in Europe further bolsters hopes that the Detroit maker will finally move ahead on long-rumored plans to bring the Ranger back to the American market, filling a yawning gap left wide open when it killed off the old, U.S.-made Ranger a few years back.

Developed for a range of markets, from Thailand to South Africa, the midsize Ranger will undergo some significant updates as it comes to Frankfurt, notably a focus on fuel economy. The addition of Stop-Start and a new electric power-assist steering system should increase mileage by as much as 17%, Ford claims. 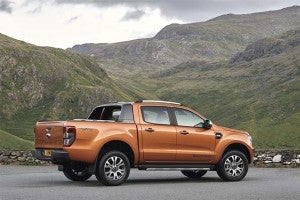 The old U.S. version of the Ford Ranger was abandoned in 2011 and has yet to return.

The updated Ranger adds a variety of safety and performance features, from Lane Keeping Aid to Hill Launch Assist.

Ford is reportedly preparing a U.S. version of the midsize Ranger model it launched overseas two years ago. The move appears to be triggered by the unexpectedly strong response to the all-new Chevrolet Colorado and GMC Canyon models General Motors launched last year. Ford abandoned the segment in 2011 when it stopped production of the older version of its Ranger. It has frequently said the new model was not intended for the North American market, but a revised version is apparently under development.

Speculation suggests a U.S. Ranger could be built at a Ford plant outside Detroit that will lose two models, the Focus and C-Max, in several years. 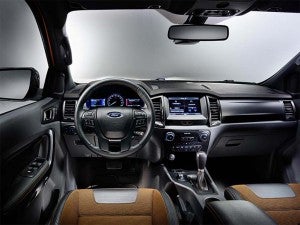 The interior of the Ranger Wildtrack picks up on the distinctive orange exterior paint.

The 2011 demise of the old Ranger was no surprise. For one thing, the pickup had not been updated in a number of years and it would have needed a major overhaul to meet new federal safety requirements, never mind consumer demand. Sales of midsize trucks, meanwhile, had declined by nearly 90% since the peak years in the early 1980s, and Ford officials contended that with little gap in pricing, midsize buyers could readily be converted to full-size F-Series owners.

But the maker apparently under-estimated the impact of the new General Motors models which have spurred a flurry of interest in the segment, along with a surge of sales for GM which also had briefly abandoned the segment. Toyota also hopes to boost sales with a 2016 remake of its Tacoma pickup.

(Click Here for a review of the redesigned 2016 Toyota Tacoma.)

Other entries are coming. Honda, which pulled the plug on its unusual, car-based Ridgeline two years ago, will be back with an all-new version soon. And Hyundai’s U.S. CEO Dave Zuchowski recently told TheDetroitBureau.com that he strongly expects to win approval for the maker’s own pickup, a production version of its Santa Cruz concept.

Officials at Fiat Chrysler say they’re continuing to look at their own options for a return to the midsize pickup segment.

The challenge for Ford is determining just how much of a change would need to be made to market the new Ranger in North America. CEO Mark Fields previously told TheDetroitBureau.com the global version is too expensive to produce in order to maintain a reasonable price gap between a U.S. Ranger and the well-established F-Series full-size truck.

How Ford will lower production costs is uncertain but it could mean “de-contenting” the American Ranger. The richer design and higher content overseas wasn’t a problem because global demand for the full-size F-Series is minimal, the truck too large for most foreign markets.

How soon a new Ranger might come to the U.S. is uncertain, but the Focus and C-Max models were expected to move out of the Wayne Assembly Plant by 2018.