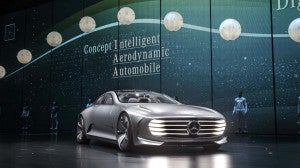 Mercedes-Benz put a lot of thinking into the background briefing it held Monday evening ahead of the official opening of the 2015 Frankfurt Motor Show, the maker rolling out a procession of “Intelligent Drive” vehicles, including not only a self-driving version of the big S-Class, but also a teardrop-shaped show car it dubbed the Intelligent Aerodynamic Automobile.

The Mercedes Concept IAA for short, it is one of the sleekest, wind-cheating automobiles ever designed, thanks to both active and passive aerodynamic elements. That includes eight fold-out panels that extend the vehicle’s length by more than a foot at speeds above 50 miles an hour. Additional flaps help channel air around the wheels, giving the show car one of the lowest levels of aerodynamic drag ever recorded.

Inside, the Concept IAA looks like a more conventional luxury sedan, picking up the familiar cues of the Mercedes-Benz S-Class, but adding more advanced touch-based controls to create what the automaker describes as a “highly emotional, digital experience.”

“What’s definitely clear to me is that this car here and the outlook for Mercedes‑Benz have one thing in common – they both look damn good,” joked Dieter Zetsche, head of the Mercedes brand and CEO of parent Daimler AG. 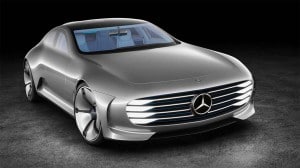 Active aerodynamics have been around for several decades. As far back as the late 1980s, the Mitsubishi 3000GT incorporated a rear wing and other design elements that would change shape or position depending on the vehicle’s speed. Active aero can be used to both cut drag and reduce lift at high speeds.

But the Mercedes Concept IAA takes things a step further. Designed using some of the latest in computerized fluid dynamic algorithms, the show car actually changes shapes as it hits 50 miles an hour, those eight panels extending the concept’s length from 5040 millimeters to 5430 mm, or from 198.4 to 213.8 inches. 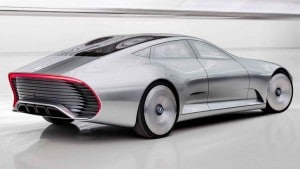 The show car actually changes shapes as it hits 50 miles an hour, those eight panels extending the concept’s length.

Simultaneously, several flaps in the front bumper extend about an inch forward, while rear bumper flaps stretch nearly as much. That helps channel air around the wheel arches. The wheels normally create some of a vehicle’s “dirtiest air,” designer lingo for creating drag. Meanwhile, another louver opens up in the front bumper to improve underbody airflow.

The Mercedes Concept IAA picks up where the maker’s F 015 concept, first revealed at the Detroit Auto Show last January, left off. 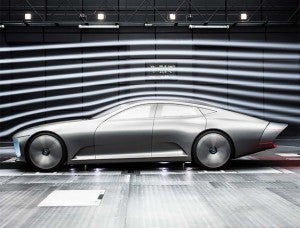 The Mercedes Concept IAA picks up where the maker’s F 015 concept left off.

Like a number of recent show vehicles, the Concept IAA abandons traditional sideview mirrors in favor of cameras that display images on small monitors inside the cabin.

Even the headlights break from traditional design, light appearing to emerge from behind the broad, slatted grille. The taillights appear to ring a similarly slatted back end.

Mercedes claims the Concept IAA sets a record for dynamic efficiency, but that is likely to draw some protest from Volkswagen which was able to trim the drag coefficient of its little XL1 eco car to just 0.186. But whether it’s the record holder or not, the Mercedes Concept IAA hints at the extremes automakers will be going in the years ahead to continue boosting fuel economy in the face of ever-tougher global emissions and mileage standards.

While there are no plans to put the Mercedes show car into production, some of the less radical elements could start showing up in the near future, particular on some of its battery-based vehicles, insiders suggest.