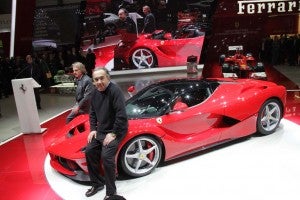 Fiat Chrysler Automobiles could launch the eagerly awaited initial public offering of its Ferrari brand as early as Friday, according to various industry reports.

The move could generate as much as $1 billion in much-needed revenue for FCA, but it also raises some serious questions about the future of the ultra-exclusive Ferrari. A debate over how much to grow the brand last year resulted in the ouster of long-time CEO Luca di Montezemolo, who favored a go-slow approach.

FCA CEO Sergio Marchionne has wanted to take more advantage of Ferrari’s image in the global luxury market, however, and is expected not only to push for faster growth of the brand’s luxury cars, but also to license its prancing pony logo for a broader range of upscale goods.

“They’re pitching it as a luxury goods company, rather than as a car company,” said Joe Phillippi, a veteran automotive financial analyst with AutoTrends Consulting. “They’re going against the grain of what Ferrari has been, which was part of the conflict that led to Montezemolo leaving.”

(Click Here for a first look at the Ferrari 488 Spider.)

The plan is to sell off 10% of Ferrari’s shares in the IPO. Another 80% will be distributed to existing Fiat Chrysler shareholders. The remaining 10% is currently held by Piero Lardi, the son of company founder Enzo Ferrari. 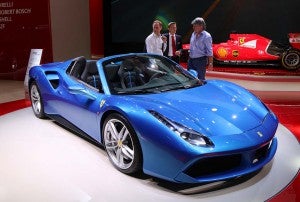 “It won’t be a difficult (sell),” Marchionne said earlier this year, reflecting the general expectation that investors will snap up the shares of Ferrari if priced properly. The CEO has said he expects the brand will be valued at around $11 billion.

“We believe our history of excellence, technological innovation and defining style transcends the automotive industry, and is the foundation of the Ferrari brand and image,” the company said in a registration statement filed with the U.S. Securities and Exchange Commission this past July.

Marchionne had long resisted calls for an IPO, calling the company one of FCA’s crown jewels. He appears to have reversed course due the trans-Atlantic automaker’s need to fund future growth.

But the IPO can’t actually take place until October 13th due to legal restrictions. The trans-Atlantic automaker is legally registered in the Netherlands and officially headquartered in London where regulations forbid a spin-off of assets for at least a year after the Fiat and Chrysler merger.

Newly issued Ferrari shares will be listed on the New York Stock Exchange, as are those of Fiat Chrysler.

Based in Maranello, Italy, Ferrari was founded in 1947 and has built a fierce reputation both on and off the race track. It has formally limited production to just 7,200 vehicles a year and often has as much as a three-year waiting list for key product lines. Top models, such as the La Ferrari, readily go for over $1 million.

If anything, there has been intense debate over that sales cap, something that reportedly contributed to the retirement of long-time Ferrari CEO Luca di Montezemolo last year. Another factor may have been Ferrari’s recent problems on the Formula One circuit after dominating that legendary series for much of the previous decade.

(Porsche on a Mission with 600-hp battery supercar. Click Here for a closer look.)

In its prospectus, Ferrari said, “We pursue a low volume production strategy in order to maintain a reputation of exclusivity and scarcity among purchasers of our cars and deliberately monitor and maintain our production volumes and delivery wait-times to promote this reputation,” noted the new Ferrari prospectus.

What defines “exclusivity” is, of course, a matter of debate, and Ferrari may take a cue from ultra-luxury marques like Bentley, that seem to have run into little resistance as they’ve pushed well above and beyond once firm caps on production.

The Italian automaker already has lent its name and logo to Ferrari-branded items like sunglasses, watches and even laptop computers. It also may add new entertainment venues like the one it now operates in the Middle East. Ferrari World Abu Dhabi is the world’s largest indoor theme park.

The real question is what it will do on the car side. Most observers expect production of traditional models to increase. But Ferrari could take a cue from Bentley and rival Rolls-Royce and target those who can’t quite reach high enough for its current products.

“They may opt to go down-market to grow their volumes,” said Phillippi.

The challenge there would be to grow sales without diluting the Ferrari brand’s carefully nurtured image.

(Click Here to check out the new Lamborghini LP410-4 Huracan.)