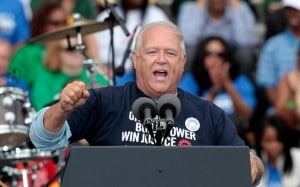 UAW Pres. Dennis Williams had been willing to strike - but said that would have meant failure.

After a marathon push meant to avert a possible confrontation, Fiat Chrysler Automobiles reached a tentative agreement with the United Auto Workers that is expected to become a template for contracts with the General Motors and Ford Motor Co., as well.

The settlement was announced more than 19 hours after the union granted FCA U.S. an hour-by-hour extension of the previous 4-year contract to avert a potential costly strike that could have proved costly to both sides.

While specific details have not been released, UAW President Dennis Williams said the settlement with FCA meets all three of the union’s top objectives, among them job security, better wages and improvements for second-tier workers earnings barely half as much as senior colleagues.

(Click Here for complete coverage of the 2015 Frankfurt Motor Show.)

Williams hinted that senior workers will   get a pay increase as part of the agreement, which still must be ratified by the company’s 40,000 unionized employees in the U.S.

The proposed contract also includes language that will start the industry towards placing the health-care resources of the industry into one giant pool, sources indicate.   The two-tier wage system that has been featured in UAW contracts since 2007 also appears headed for elimination. 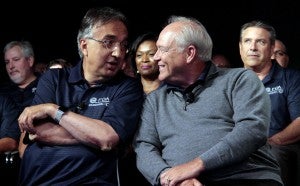 FCA's Sergio Marchionne and UAW's Dennis Williams shared a laugh during the opening of contract talks earlier this summer.

“We believe we have met those goals,” Williams said.  “But ultimately that’s up to the members to decide.”

Williams also said during a post-settlement press conference that he believes the tentative agreement will be acceptable when it is presented to General Motors and Ford Motor Co. where more than 100,000 workers are currently working under contract extension. It is the norm for the UAW to focus on just one manufacturer as the deadline approaches, aiming to come up with a pattern-setting agreement it then can aim for with the remaining two companies.

Negotiations at both GM and Ford were effectively put on hold when the UAW decided to target Fiat Chrysler earlier this month. Once the new FCA contract is ratified by the rank-and-file, the union will push GM and Ford to pick it up with only the minimal necessary revisions.

The two-tier wage system, where new workers received less than senior employees doing the same job, appears headed for extinction.  “That issue will go away over time,” according to FCA U.S. chief executive Sergio Marchionne, who said the contract includes ways to raise the wages of employees as they learn more and become more adept at their jobs.

The two-tier system was established under duress as the U.S. auto industry plunged into a financial recession that ultimately drove the former Chrysler Corp. and General Motors into bankruptcy. Various concessions helped all three of the domestic manufacturers to slash labor costs by as much as $20 an hour, putting those costs more on a par with so-called transplant assembly plants in the U.S. owned by foreign brands like Toyota, Hyundai and Volkswagen.

At FCA, 43% of the hourly UAW workforce earns lower-tier wages.

Marchionne said the wrapping up of negotiations with the UAW will free him to spend more time on pursuing a merger or consolidation that will reduce the amount of capital required to run an auto company today. “It’s necessary,” Marchionne said during a press conference.

The executive remained in Detroit to see the contract talks through their final push. He had been expected to attend the Frankfurt Motor Show, meeting with both reporters and with industry analysts.

While the Detroit makers said they needed to ensure wages didn’t rise under their new, four-year contracts, the manufacturers faced heavy pressure from the UAW rank-and-file, spurred on by the strong profits the three makers have been reporting lately.

FCA’s North American operating profit in the second quarter reported on July 30 was $1.35 billion, up 37% from the previous year.

Going into this year’s negotiations, the UAW was freed up from a key restriction placed on it as part of the 2009 federal bail-out of General Motors and Chrysler. But while the union was technically in a position to strike if negotiations failed, UAW chief Williams said he would view that as a “failure.”

In fact, the union knew that would have potentially dire effects, not only hurting short-term wages for striking workers but likely impacting longer-term sales and market share for any company hit by a strike and that, in turn, would make it more difficult to ensure jobs.

The UAW also worried that a strike would scare off workers at those transplant factories that have long resisted organization. The union recently scored a big victory when it was authorized to sign up workers at the VW plant in Chattanooga, Tennessee. Now, by showing it was able to make big gains without confrontation, the UAW hopes it could build momentum and sign up workers at other foreign-owned factories.

Proponents of organized labor also hope that the success of UAW talks in Detroit will possibly embolden workers in other industries where pay has stagnated in the face of economic uncertainty and global competition.

“The stakes go well beyond Detroit and the automotive industry,” said Harley Shaiken, a long-time labor analyst and author based in California.