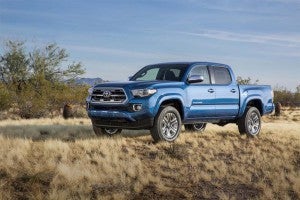 Toyota is hoping the next-gen Tacoma will keep the good times rolling sales-wise in the U.S. in 2015.

When the 2016 Toyota Tacoma rolls into U.S. showrooms next month it will mark the first major update of the midsize pickup in a decade, an eternity by today’s automotive standards.

Considering the long somnambulant segment has suddenly roared back to life in recent months, one might expect to see Toyota prepping for a major surge in sales for the 2016 Tacoma. But it’s not. The Japanese maker is looking for modest growth, at best, for the new pickup next year.

The reason is simple, according to Toyota division General Manager Bill Fay: “We’re very close to maxxed out on our production capabilities right now,” despite adding more capacity at a plant in Baja, Mexico.

Ironically, it’s the old Toyota Tacoma that has been experiencing big growth, sales jumping 20% the first seven months of the year, well beyond the solid pace of the recovering U.S. automotive market.

That surge comes despite the launch of two well-reviewed competitors from General Motors: the Chevrolet Colorado and the GMC Canyon. More accurately, some analysts would suggest, the Toyota Tacoma has been doing well because of those two GM models. They’ve revived interest in a market segment that has been declining for decades.

(Toyota Q2 profits hit a record high. Click Here to find out the unusual reason why.)

There was a time when midsize models outsold full-size trucks but today the smaller pickups generate barely 10% of the volume. While Toyota’s Fay says that isn’t likely to flip-flop again, there is growing interest in midsize models as more new product comes to market. And that surge is expected to continue with Nissan and Honda both preparing new midsize trucks. 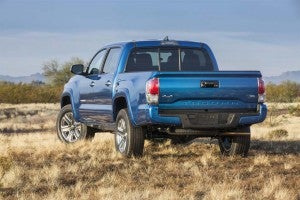 The 2016 model marks the first real update of the Toyota Tacoma in a decade.

Toyota maintains a 50% share even with the strong sales of the new Chevy and GMC models, but it will be increasingly difficult to hold over half of the segment if it keeps growing, acknowledged Fay.

All told, Toyota is currently shooting for total pickup sales of around 275,000 this year, a figure that includes both the Tacoma and the full-size Tundra model. At most, the executive said, “We’ll make a good run for 300,000 in 2016.” But that will pretty much run the maker up against a wall at its truck plants in Baja and San Antonio, Texas.

If demand is strong enough, Toyota might “toggle back and forth,” trimming production of the Tundra, Fay suggested, while increasing output of the Tacoma which rolls down the same assembly line. That could yield as many as 180,000 of the compact trucks from the San Antonio plant, a 10% increase. But the bigger truck has a higher price tag, so that’s not an entirely satisfactory solution.

Clearly, GM, Nissan and Honda have to be pleased to see Toyota’s options limited. The overall midsize truck segment has grown by about 50% this year, more than any other niche in the mainstream U.S. auto market. Competitors can look forward to picking up the bulk of any future growth, and that could provide some instant momentum for Honda when it relaunches the Ridgeline pickup after several years off the market.

There are, of course, ways Toyota could address its production problem. It took one step already by adding a third shift at the Baja plant. And the potential is there to boost capacity at San Antonio. It could even add an entirely new plant as Toyota’s top management recently ended a self-imposed moratorium on building new factories in a bid to focus on quality issues.

Adding capacity is “something we’re evaluating all the time,” said Fay, though there are no plans currently in place.

But auto analyst Joe Phillippi, of AutoTrends Consulting, said that’s only a matter of time, especially if the pickup segment keeps growing.

“If they need more capacity, they’ll find a way,” he said, adding that “They have to protect the franchise.”

The Toyota Tacoma has been the overwhelming favorite of American midsize pickup buyers for years, and in today’s hotly competitive market, Phillippi stressed, that’s an enviable lead that a manufacturer doesn’t readily cede.

(VW takes the global sales crown away from Toyota. Click Here for the latest.)