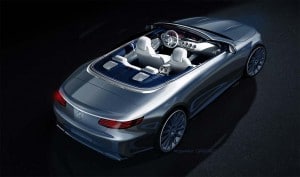 Mercedes claims the S-Class Cabriolet would be the first ragtop in its segment since 1971.

Mercedes-Benz will be introducing an all-new convertible version of its big S-Class model, the maker has revealed.

Details are few – to the point of almost non-existent. Along with this rendering of what the S-Class Cabriolet will look like, the German maker claims it will be “the first luxury four-seater cabriolet since 1971,” an apparent reference to a full-size convertible.

Precise details, including when and where the new ragtop will make its debut haven’t been revealed, but the timing of the announcement would strongly suggest that Mercedes will give the S-Class Cabriolet its first showing at the Frankfurt Motor Show next month.

The carmaker has already confirmed it has a wide range of new and “innovative” products to show for the first time at the biennial Frankfurt event.

The addition of a convertible would bring to six the number of different variants of the current S-Class line, at least by Mercedes’ count. This apparently includes the basic sedan and coupe versions, such as the S550, the various Mercedes-AMG performance options, and the two Mercedes-Maybach lines, including a stretched edition that will carry a price tag reaching into the million dollar range when fully customized.

There have been rumors that Mercedes would go for a convertible version, and the big question was what form it would take. Some had expected the maker to opt for a four-door body, which would also be a significant milestone, a body design that hadn’t been seen since the iconic Lincoln Continental of the 1960s.

Such a design would pose significant engineering issues, especially in terms of meeting safety regulations, industry insiders have cautioned, one reason why Chrysler killed a project aimed at developing a convertible four-door version of the big 300C sedan a decade ago.

While it can be difficult to judge from a rendering like this one, the Mercedes-Benz S-Class Convertible appears to be a shortened version of the standard sedan, though the front doors have been lengthened to provide easier access to what is still a seemingly plush and roomy rear seat.

(Click Here for details about Daimler and Bosch creating a new valet system.)

Among the safety features it appears to have added, there look to be pop-up rollover bars on the S-Class Cabriolet.

Other features are likely to be borrowed from other Mercedes cabriolets, such as the “Neck Scarf,” a system designed to blow heat on the back of a passenger’s neck so the top can remain down even in cooler weather.

(To see more about BMW, Audi and Mercedes acquisition of HERE, Click Here.)

We’re hoping to learn more about Mercedes’ plans for the S-Class Cabriolet in the coming month, possibly.