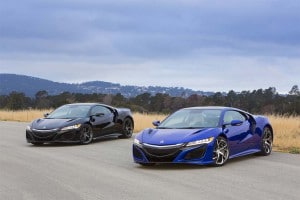 Acura revealed the revised version of the new NSX at the Pebble Beach Concours.

If you’ve been waiting to get your hands on the reborn Acura NSX you will have to wait just a little bit longer.

The original end-of-year target for getting the supercar into showrooms has been pushed back to the first quarter of 2016, officials with the Honda luxury brand have confirmed. But that’s not all bad news. The extra time will give Acura an opportunity to improve the performance of the two-seater.

As it now stands, the production model will get a significant boost in performance compared to what was planned when the supposedly final, production version of the Acura NSX was unveiled at the Detroit Auto Show last January.

The key update includes a switch from a single to twin turbochargers for the NSX’s six-cylinder engine. That, in turn, required the maker to add three inches to the length, and two inches to the width of the model first revealed in Detroit. 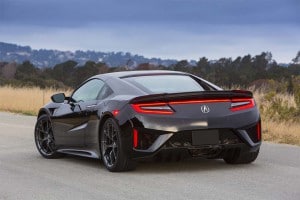 The final production version of the 2016 Acura NSX will be both slightly longer and wider.

This marks at least the second major mid-development shift in the design of the new NSX’s powertrain. When first conceived, Acura was planning on a naturally aspirated, transverse-mounted V-6. It switched to a longitudinally mounted single-turbo design halfway through development.

The latest move won’t change one key element of the new sports car’s design, however. The reborn NSX will continue to go with a uniqu

e, three-motor gas-electric hybrid driveline. The mid-mounted, biturbo 3.5-liter V-6 and one of the motors will drive the rear axle, with the other two motors mounted up front, one for each wheel. That layout is expected to permit a significant amount of torque vectoring to improve the sports car’s cornering capabilities.

Acura has been coy when it comes to providing many details about the NSX. It initially said only that the new model would make “at least” 550 horsepower from the combined driveline. How much more it will now be able to manage is far from certain. The twin-turbo design may have been added to provide a broader torque curve, with one of those blowers tuned for launch, the other for mid and higher-speed maneuvers. 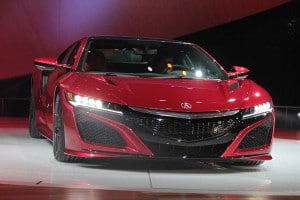 The NSX at its Detroit debut.

Acura also hasn’t said why it made the last-minute switch, but it could have been responding to the less than wildly enthusiastic greeting the NSX got in Detroit where it lost a little steam in the face of Ford’s roll-out of the even more powerful and exotic new GT ultracar.

The delay in the launch of the NSX will allow the maker to complete validation of the updated powertrain, and also to revise production tooling.

The Acura supercar will be produced at a special facility, the new Performance Manufacturing Center, parent Honda has built adjacent to its older Accord plant in Marysville, Ohio.

(Gas-powered cars may soon become the exception, not the rule, in California. Click Here to find out why.)