Union leader says country “continues to be an issue” for UAW. 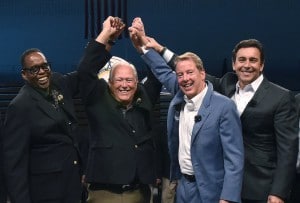 As expected, the ceremonial handshake between Ford Motor Co. and UAW negotiators was a mix of optimism and reality with Dennis Williams bringing the latter to fore right away.

“Mexico continues to be an issue for us,” Williams said during his comments kicking off the talks. “I want everything to be built in the United States, including tennis shoes.”

Mexico is an issue because Ford recently announced it would be moving production of the slow-selling Ford Focus and C-Max from their current plant in Wayne, Michigan, to an unnamed facility.

Ford in April said it was investing $2.5 billion in the Mexico for a new engine and transmission plant, thus it became the most likely option where the two vehicles will land. While putting on its best smile, the UAW said production of the vehicles were being moved to Mexico, but that they were confident there would be something taking their place at the Michigan plant.

Executives for the automaker at the time and again today declined to confirm where the two vehicles will be built. However, they did say there were no plans to close any plants, implying that a new product will come to the Wayne plant.

However, one product that won’t be coming is the new Lincoln Continental. Officials recently confirmed it will be headed to manufacturing facility in Flat Rock, Michigan, that produces the Ford Fusion and Mustang. There have been rumors floating that the automaker is considering bringing back an old name, the Torino, in the near future.

The Wayne plant won’t lost Focus and C-Max until 2018, which would give the automaker plenty of time to complete the design of and produce the tooling for the rumored Torino. However, Ford officials stuck to the company line.

“We have to look at our overall footprint, and how we can best improve overall profitability for the company,” said John Fleming, executive vice president of manufacturing and labor affairs for Ford.

Ford is not alone in eyeing Mexico. General Motors announced plans to invest $3.6 billion through 2018 in Mexico, seeking to double its production capacity there.

The problem with Mexico is profound for the UAW president. Williams is so concerned about the impact that Mexico is having on U.S. workers, he discussed it last Friday with U.S. Labor Secretary Thomas Perez and President Barack Obama at the White House. He told the pair that free trade agreements are hurting U.S. manufacturing.

He said the had a plan to help Mexican workers, but declined to elaborate on it, saying only, “They’ve got good laws that they don’t enforce.”