Federal regulators worried that safety systems could fail -- or worse -- on older vehicles.

A Takata airbag after a crash. The supplier hasn't been able to pinpoint the problem causing the airbags to explode.

They’ve been called one of the most important safety technologies ever developed, but there’s growing concern that as airbags age they could become a major threat to the safety of millions of American motorists.

Nearly a dozen different automakers have so far recalled more than 40 million vehicles around the world due to faulty airbags produced by Japan’s Takata Corp. that have been blamed for at least eight deaths and 100s of injuries. But as NHTSA launches an investigation into the supplemental restraint system provided by a second supplier, the nation’s top automotive safety regulator told TheDetroitBureau.com that he’s worried the problem could be far more widespread.

“Cars are lasting on the road a lot longer than ever before,” said Mark Rosekind, head of the National Highway Traffic Safety Administration, during a visit to Detroit. “Is aging now an issue? That’s part of the investigation going on.”

And it’s taking on increased urgency as automotive regulators, safety advocates and industry officials begin to question whether a technology designed to save lives can, over time, become a threat to life and limb.

Starting in 1989, automakers were required to equip all new vehicles with some sort of passive restraint system, technology designed to protect even unbelted occupants in a frontal crash. Initially, they responded with a mix of different technologies, but by the mid-1990s the rules were rewritten to mandate only airbags. 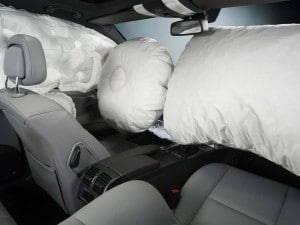 Some vehicles today have 10 or more airbags.

At their most basic, so-called supplemental restraint systems are designed to remain hidden until a crash occurs, bursting out of their hiding places to provide a pillowy cushion that can significantly reduce crash forces. Over the decades, they have been credited with savings 1,000s of lives.

Suppliers have tinkered with different ways to inflate their airbags. Some have relied on tanks of stored gas, others on pyrotechnic inflators or a pairing of the two. But pyrotechnic systems have made up the majority of the millions of airbags installed each year. And that’s where the potential problem lies.

They’re essentially what the military calls “shaped charges,” explosives packed in a precise way to control both the speed and direction in which they blow up. The goal is to create a precise rush of hot gases that inflate a hidden airbag quickly enough to cushion an occupant even in a high-speed crash. In the Takata case, however, the inflators used in some older vehicles have triggered far too aggressively, not only inflating the airbag but shooting shrapnel into the passenger compartment.

While NHTSA’s Rosekind cautioned that the precise cause has yet to be determined, initial evidence suggests the problem is most severe in states with warm weather and high humidity. So far, about 40,000 older Takata airbag systems have been collected from around the country and set off in controlled lab tests and, he noted, about 300, or slightly less than 1%, have failed catastrophically during testing. 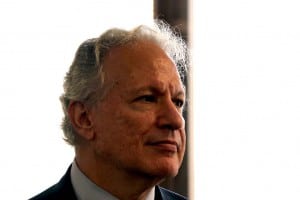 “Seventy to 80% of the ruptures” involve airbags that were used in vehicles from Florida, the NHTSA chief explained.

So far, just two “incidents” have been identified involving ARC inflators, but the concern is that there may be others yet unidentified, said Clarence Ditlow, director of the Washington-based Center for Auto Safety.

“Could we have missed more? That could be the case,” said Ditlow, noting that several Takata airbag deaths were initially misidentified. In one, Florida police thought the shrapnel wounds to a victim’s head and chest were the result of a vicious knife assault, and they first began looking at the crash as a murder scene.

“There’s a general acceptance in the industry that a propellant (inflator), if not properly engineered and manufactured, could create significant problems,” cautioned Ditlow, in an interview with TheDetroitBureau.com.

So far, Takata appears to be the real outlier, a supplier that had serious problems, either with the design of its airbag inflators, with the material used to make those explosive devices, or in the manufacturing process. But what worries everyone is that even good inflators could go bad over time.

Tucked out of sight, airbag systems have to tolerate huge variations in temperature – in some cases from -40 to over 200 degrees Fahrenheit – and humidity. And they are shaken, rattled and rolled over railroad tracks, gravel roads and potholes. Complicating the situation, the age of the average vehicle on the road today is 11 years, the oldest ever. And it’s not unusual that some vehicles with the very earliest airbag systems are still in operation.

“It may be a reasonable assumption that as these things age they deteriorate,” cautioned automotive analyst George Peterson.

Even a small amount of pyrotechnic material flaking off, or changing in molecular structure could significantly alter the way they inflate when triggered, experts suggest. Meanwhile, over time, “Seals (could) start breaking down,” warned NHTSA’s Rosekind, which could allow explosive gases to do unintended things.

While the agency administrator said the focus remains on Takata, NHTSA is starting to look more broadly at potential airbag problems. Dave Zuchowski, the CEO of Hyundai Motor America, told TheDetroitBureau.com that his company was advised by a NHTSA official of “the potential residual (problem) of older vehicles with original airbags.”

“It appears there is more to the airbag story than just Takata,” Zuchowski added, noting that the Korean carmaker is now checking its records to see if it has used any of the suspect ARC inflators or experienced other airbag issues that might have been missed previously.

In the more than a quarter century since the first supplemental restraint mandate went into effect, more than 300 million vehicles have been sold in the U.S. alone using airbag technology. Some vehicles today feature more than 10 of the devices to protect passengers not only in frontal crashes but in side impacts and rollovers. Even skeptics acknowledge airbags have saved thousands of lives.

“No one is saying you should disable your airbags,” safety advocate Ditlow stressed. “You’re far more likely to be helped than hurt by one if they go off.”

But the fact that there is any risk at all, “That would be a major concern,” said Sen. Gary Peters, a Michigan Democrat on the Senate Commerce, Science and Transportation Committee.