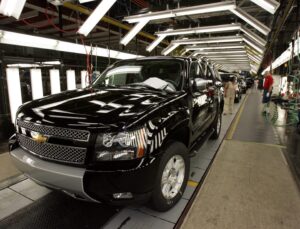 GM is investing in a $1.2 billion expansion of its Arlington, Texas, plant to keep up with demand for large SUVs.

Just a day after meeting with UAW leaders to shake hands and swap expressions of goodwill, General Motors’ CEO Mary Barra gets to enhance the good mood by announcing the company’s plans to invest $1.4 billion in its Arlington, Texas, plant.

The investment is part of a $5.4 billion plan announced in April to upgrade GM plants across North America. This bundle of cash is the largest yet, surpassing the $1.2 billion at its Fort Wayne, Indiana, plant and the $1 billion tabbed for the company’s Tech Center in Warren, Michigan.

Between the investments in Indiana and now Texas totaling $2.6 billion, it’s clear that GM expects to ride the full-size truck and SUV wave as long as possible.

“This super-sized investment reflects GM’s commitment to our full-size SUV customers who expect nothing but the absolute best from us and their vehicles,” said Cathy Clegg, GM North America Manufacturing and Labor Relations vice president, in a statement. Clegg will also lead the negotiating efforts with the UAW.

(GM, UAW “in it together” as contract talks begin. For more, Click Here.)

The Arlington investment includes a new paint shop, body shop and general assembly area upgrades. Construction is expected to begin this summer and take approximately three years to complete. Production schedules for Chevrolet Tahoes and Suburbans, GMC Yukons and Yukon XLs and Cadillac Escalades will be unaffected by the construction.

Since 2011, GM has invested nearly $2 billion in manufacturing improvements at the 60-year-old facility. Not only does investment secure GM’s commitment to large vehicles, it also helps the company address one of the potential sticking points the UAW will be addressing with all three Detroit-based automakers: securing jobs.

While GM can simply roll out the list of plant investments its announced since April 30, Ford is facing a tougher deal since it recently announced it would be moving the production of the Focus and C-Max to Mexico. Although there has been plenty of rhetoric about replacing that production at the Wayne, Michigan, plant there have been no concrete plans laid out and certainly nothing on the magnitude of GM’s string of cash-tossing in Michigan, Kansas, Indiana and Texas.

In addition to the multi-billion dollar investment plan, GM put a little extra in its hourly employees profit-sharing checks this year and recently confirmed its commitment to a small-car project at its plant in Orion Township, Michigan.

(Click Here for details about the new look for the 2016 Chevy Silverado.)

As the largest of the domestic automakers, employing about 50,000 UAW members at its vast U.S. automotive operations, General Motors is the first of the Detroit Big Three to begin contract negotiations.