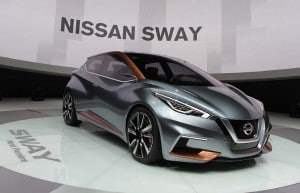 The Nissan Sway concept at its Geneva Auto Show debut. Nissan is ahead of Toyota in European sales so far this year.

Despite the threat of a Greek banking collapse and a breakup of the Euro Zone, European car sales posted their biggest gain in five years, surging 15% in June.

Marking the region’s 22nd consecutive month of growth, Europe has now seen an 8% rise in sales since the beginning of 2015, though volume is still well off from the industry peak. Nonetheless, the latest upturn is good news for an industry that has lost billions of dollars in the region and struggled with massive excess capacity.

“This is all good news if this trend continues,” said Carlos Da Silva, an analyst with IHS Automotive, who described the upturn as “robust” and “quite convincing.”

The timing of the European upturn couldn’t have come at a better time, some analysts suggested, noting that the long boom in the Chinese market has been stuttering in recent months, with June marking the first sales decline in nearly 2.5 years.

All of the major European markets posted upturns last month, according to the European Automobile Manufacturers Association, or ACEA, the industry trade group. Spain, which has its own financial crisis just a few years ago, posted a 23% increase, while France was up 15%. Italy, another country that had to cope with major economic issues, reported a 14% gain. Both Germany and Britain saw sales rise by 13%.

Of all the major mass-market manufacturers, only Renault failed to generate a double-digit sales increase. Its numbers were, nonetheless, up 4.5% for the month.

There were a few surprises, however. Nissan managed to eke out a modest 15,000 vehicle lead over rival Toyota for the first six months of 2015, selling 294,140 vehicles in Europe. It marks the first time Japan’s second-largest maker had the first-half lead in 18 years. Nissan has set a goal of topping Toyota for the full year in 2016.

Some of the biggest gains were posted by Fiat Chrysler – which saw demand almost triple for the Jeep brand – up 18% overall. Volkswagen jumped 17% in June, with Ford up 16%.

(Could bad news abroad be good news for American motorists? Click Here to find out.)

Not everyone is entirely optimistic about where Europe will go in the months ahead. For one thing, there are signs that recent sales numbers may have been distorted by dealers pre-registering cars even before they are sold.

And while a tentative deal may have been worked out Athens, “a decline in economic confidence due to the Greece crisis may (yet) dampen the pace of growth, warned Anil Valsan, an analyst with Ernst & Young. He predicted that future months will see more modest numbers in the range of 3% to 5%, year-over-year.

ACEA, which follows sales data from 28 of the 29 European Union members, along with sales in Iceland, Norway and Switzerland, also anticipates growth will level off at around 5%. But that is ahead of the trade group’s earlier forecast of 2% for 2015.

“It’s looking good for Europe,” said Frank Biller, an analyst for LBBW. “There is a solid upward trend, also partly due to a catch-up effect after demand declined during the financial crisis.”

(Ferrari IPO may be just “days away” hints Marchionne. Click Here for more.)