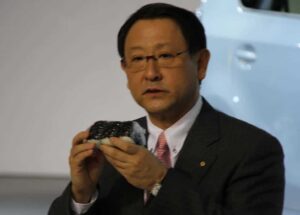 At least one automaker is pledging to get to the bottom of the problem with Takata-produced airbags that has resulted in the largest-single product recall in U.S. history: Toyota.

Akio Toyoda, Toyota’s president, said resolving the problem with airbags is critical to maintaining the public’s trust and is an industry-wide concern. The airbags can explode sending shrapnel into the cabin of the vehicle.

The result has been six deaths, more than 100 injuries and the recall of 33.8 million vehicles in the U.S. and nearly double that globally. While the problem initially showed up regions with high humidity, the problem isn’t limited to those areas and the root cause of the problem is still unknown, Toyoda said. It’s an assertion supported by Takata officials and others.

A Takata airbag after a crash. The supplier hasn't been able to find the problem causing the airbags to explode.

Many of the makers joined forces and hired Orbital ATK, an aerospace and defense technology company based in Dulles, Virginia, to perform tests to try to resolve the problem. Takata and U.S. safety officials are also working to find out the cause of the problem and a solution.

“It’s like a sickness. You have to find out what’s causing it if you hope to treat it and fix it,” Toyoda said, according to Associated Press.

Adding to the concern is that the current recall procedure calls for a replacement of the airbag module, including the faulty inflators. However, since the problem with the inflators remains undiagnosed, the problem isn’t being solved and that the current effort is little more than a band-aid that will have to be ripped off and fixed again in a few years.

Takata is scrambling to build as many replacement kits for the affected vehicles as possible. It’s doubled its own production capabilities and enlisted competitors to build them as well. Before the new recall came down, there were 17 million vehicles recalled for the problem and the estimates for repairs were given in years, not months. Doubling the vehicles in the pool only adds to the problem.

(Click Here for details about the impact of the Takata recall on automakers.)

Yesterday, the National Highway Traffic Safety Administration filed legal paperwork aimed at speeding up the process of getting the completing the repairs. It called for the parties to work together to come up with and submit a plan to the agency to expedite the repairs. If the plan doesn’t meet expectations, Transportation Secretary Anthony Foxx can implement his own plan.

Simmering below the surface is some additional apprehension that Takata may not have the finances to handle the situation. While the company manufactures other products, such as seat belts, that are profitable, the company did report a loss last quarter due to the impact of the recall.

If the problem requires a complete redesign of the inflators, the costs associated with it could escalate quickly. However, there is a feeling that Takata’s problem is considered to be the industry’s problem and the automakers would step in to absorb some of those costs.