Teen Drivers Pose a Risk to Everyone on the Road 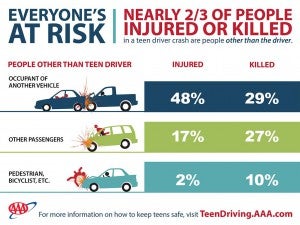 Motor vehicle crashes have long been one of the primary causes of death and injuries among teen drivers. But a new study by AAA finds that young motorists are also a danger to everyone else on the road.

In all, nearly 3,000 people were killed in teen crashes in 2013, according to the AAA Foundation for Traffic Safety, with nearly 400,000 injured. But a new AAA study finds that nearly two-thirds of the people injured or killed during a crash are people other than the teen behind the wheel.

“Teen crash rates are higher than any other age group, and this data confirms that the impact of their crashes extend well beyond the teen who is behind the wheel,” notes Peter Kissinger, President and CEO of the AAA Foundation for Traffic Safety.

The release of the new study coincides with the start of what safety experts have dubbed “The 100 Deadliest Days,” the period between Memorial and Labor Day when young drivers are out of school, driving more, and more likely to have a motor vehicle accident.

A AAA study of the federal Fatality Analysis Reporting System, or FARS, data for 2013 found, on average, 220 teen drivers and passengers died each month during that period, up 43% from the test of the year. In 2013 alone, 371,645 people were injured and 2,927 killed in crashes involving a teen driver.

“Since teens drive more during the summer than any other season, this insight is a timely reminder to everyone—drivers, pedestrians and bicyclists— to be mindful when sharing the roads with young drivers,” adds Kissinger.

The AAA analyzed police-reported crashes involving drivers between the ages of 15 and 19 that occurred from 1994 to 2013, and the data revealed:

Experts blame the high number of teen crashes on a variety of factors, including the lack of experience behind the wheel and youthful exuberance. But distracted driving has become another major cause. The National Highway Traffic Safety Administration has estimated that distracted driving is responsible for about 11% of all motor vehicle accidents. But a separate study by the AAA Foundation concluded that it is the cause of nearly six out of 10 moderate to severe teen crashes.

(For more on that distracted driving study, Click Here.)

“The in-depth analysis provides indisputable evidence that teen drivers are distracted in a much greater percentage of crashes than we previously realized,” AAA’s Kissinger noted last March.

While cellphones and texting often get the blame, less high-tech distractions also can play a factor, according to AAA research.

In fact, the safety group said that each person who rides along with a 16- or 17-year-old driver is likely to lead to an “exponential” increase in the risk of a crash. Add one passenger under 21 and the risk of being killed jumps 44%. With two, it doubles, and it quadruples if there are three or more passengers onboard under 21. That is a major reason why a number of states now issue graduated, first-time licenses that restrict the number of youths that a teen driver can travel with.

(Chevy aims to aid parents in reining in teen drivers. Click Here to find out how.)

The news isn’t entirely bad. The latest AAA teen driving study notes that there has been a 51% drop in non-fatal injury crashes involving teen drivers over the last 20 years, with fatal crashes plunging 56%. That’s a significantly steeper decline than the overall plunge in highway injuries and fatalities over the past two decade.

Experts credit a variety of factors, including graduated licensing programs now used in most American states. Improved vehicle safety technology, from airbags to anti-lock brakes, have also played a role.