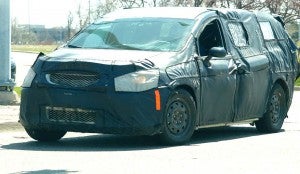 Chrysler is set to idle its Windsor plant to retool for the launch of the 2016 Town & Country.

Coming to your Chrysler dealer soon…

Here’s a look at what Chrysler has planned for the next generation of its Town & Country minivan. No, the camo-wraping is not part of the introduction package, just Chrysler’s way of hiding the completely new 2016 styling of its strong-selling soccer mom vehicle.

Fiat Chrysler’s Windsor, Ontario, assembly plant about to shut down for a summer changeover as the Town & Country gets set for a complete update for the coming model-year. The new design is only part of the story, however. The other big news is the decision by FCA to abandon the Dodge Caravan model to focus on just one minivan – a reflection of the huge slide in demand for these mom-mobiles over the past decade.

Expect Chrysler to throw everything it can into the 2016 Town & Country to hang onto what sales and market share it can. Don’t be surprised to see a few significant new features as the Detroit maker shoots to recreate past successes like its Stow-n-Go seats.

What’s under the camouflage?

Up front is a honeycomb grille mesh for both upper and lower air intakes. Chrysler’s trademark curled lower lip shape is carried over in the upper intake. Barely visible are slit-eye shapes for the headlights, replacing the oversized lamps on today’s models. A little further back you see the major difference in the body shape – the swooping A-pillar, a contrast to the ultra-simple lean of the current version. A guess: the new A-post curve offers more aero slipperiness – while also ensuring good visibility while meeting tough new roof crush standards..

Side view mirrors are smaller, oval in shape and mounted below the side glass on the door panels. The smaller dimensions here belie the multi-info (warning, turning) tasks of this reflector.

From the rear, our spy shots show…..virtually nothing of importance. Taillights now stretch in to the upper section of the hatch and the license is mounted similarly higher up. That boxy covering at the backlight disguises what may be a major change in the shape of the top of the hatch as it meets the roof – more slant, less glass.

Fiat Chrysler executives have dropped plenty of hints about what may be in store for the Dodge division. Some observers are still betting there’s a people-mover in store, if not a classic minivan. Could Dodge have a new Grand Caravan in the works in a distinctly new form?

Among the dozen or so prototype vehicles spotted at various Chrysler proving grounds recently, none bears the Dodge cross-bar grille. But, Dodge is just as strong a competitor in the van class as Town & Country, so it seems unlikely the brand will completely abandon the mom-mobile segment. It certainly needs to find a way to keep things running full speed at that Windsor plant which has long been operating on three full shifts.

We’ll keep looking and hope to bring spy shots of what Dodge will deliver in the near future.