Return of the Tomahawk?

Sports car set for videogame debut, but is production possible? 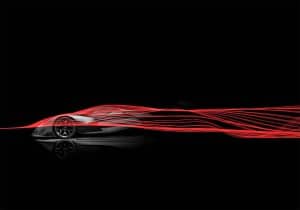 All in the game? SRT is set to jump into Gran Turismo 6 with its SRT Tomahawk sports car.

Fiat Chrysler is offering up another, more detailed tease of its SRT Tomahawk Vision Grand Turismo, with plans to fully unveil the radical sports car next week.

For now, at least, the maker is stressing that the single-seat hybrid will “be released exclusively in Gran Turismo,” the wildly popular Playstation race program that has drawn a variety of other makers, including General Motors, BMW, Volkswagen and Mercedes-Benz, to come up with their own wild rides.

For those with long memories, the Chrysler side of the trans-Atlantic automaker used the Tomahawk name once before. Around the turn of the millennium, the company introduced an oversized motorcycle powered by a Viper V-10 engine. Chrysler discussed a limited production run but the program was eventually scrapped. 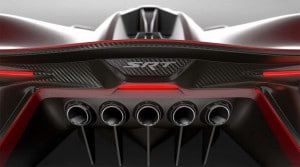 The Tomahawk concept is powered by a hybrid drivetrain with "guts," says its designer.

“We worked to make sure that it pushed the edge of the envelope,” FCA designer Mark Trostle said in a teaser video released Friday.

Beyond that, the company isn’t saying much beyond noting the new SRT Tomahawk is, in digital form, powered by a high-performance hybrid powertrain.

“It has guts to it,” said Trostle, who heads design for both SRT and Dodge.

The single-seater makes use of a number of active aero elements, the teaser video revealing twin pop-up rear spoilers and other details apparently designed to both reduce drag and enhance downforce.

(Click Here to find out how Ford is using 3D printing to win on the racetrack.)

This summer, the SRT Tomahawk will join a growing line-up of exotic racers that can plug into Gran Turismo 6. It will help mark the 15th anniversary of the Sony videogame. Kazunori Yamauchi, a professional racer and head of the Sony unit, Polyphony Digital Inc., will be on hand for the official unveiling next week.

He also was on hand at the Los Angeles Motor Show last autumn when General Motors introduced its Chevrolet Chaparral 2X Vision Gran Turismo. While GM built a scale model, it has no plans to produce the game car. It appears unlikely Fiat Chrysler will take the newest Tomahawk much further.

But then again, Infiniti recently hinted that its own Playstation entry, the Vision Gran Turismo Concept, could just be a hint of “what a high performance Infiniti could look like in the future.” Perhaps SRT might have more in store, as well.