Maker creates website for those who can’t attend in person. 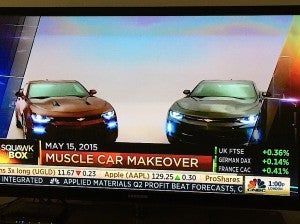 The sixth generation Camaro got an early debut today courtesy of CNBC. Chevy had planned to debut the new model in Detroit.

This story has been edited to include newly released information, including pictures, related to the story.

The winding lanes on Belle Isle, the sprawling park in the Detroit River, will be crowded with muscle cars and performance fans tomorrow, Chevrolet expecting at least 1,000 people to turn out for the official debut of the sixth-generation Chevrolet Camaro.

However, CNBC viewers got an early look at the Camaro this morning as the news outlet showed several pictures of the next-gen model while discussing its debut this weekend.

The early look shows an evolutionary design change rather than a radical departure. The nose appears a bit lower with a more rounded front and rear. It also appears smaller, which jives with what Dan Ammann, GM’s president, told CNBC when discussing the new model.

“The new Camaro, you take the old car and you make it lighter, you make it faster, you make it more nimble … slightly smaller in overall dimensions. It’s just a wonderful thing,” he said while driving the new model.

Despite the spoiler, the maker is hosting a two-day extravaganza to mark the roll-out of the new model, and expects to begin the weekend with a caravan of more than 350 classic Camaros around the Detroit park, while also offering fans rides in a Z/28 model on a specially built race course. The maker says it took just a few hours to “sell out” the free event and notes it has another 2,400 enthusiasts on a waiting list.

“The response really speaks to the passion owners have for Camaro,” said Todd Christensen, Camaro marketing manager. “I wish we could accommodate more people on Belle Isle, but we are limited by space for the reveal itself. For those fans on the wait list, Chevrolet will send them an exclusive sneak-preview of the new Camaro just before the rest of the world sees it at the reveal.”

Fans can follow the May 16 preview at a special website, TheCamaroSix.com, which will provide photos, background information and live video.

The debut of the 2016 Chevrolet Camaro comes nearly a half century after the introduction of the original, which was unveiled during a splashy ceremony in Detroit on Sept. 12, 1966 – General Motors’ response to the huge success rival Ford Motor Co. had with the Mustang “pony car.”

The two models went head-to-head for decades before Chevy pulled the plug on Camaro in 2002. GM brought the muscle car back with a retro-tinged model launched in 2009 as a 2010 model. It has finally broken Mustang’s grip on the performance market, though Ford has been regaining sales momentum since it launched its own, 50th anniversary model last year.

As TheDetroitBureau.com recently reported, while the ’16 Camaro will bear plenty of similarities to the outgoing model, there will be plenty of major changes, as well. For one thing, the 2016 Chevy Camaro will use a modified version of the compact platform first introduced for the Cadillac ATS. That means it will be slightly smaller than the current muscle car introduced in 2009.

It also will yield a more modern suspension than the current Camaro. That is a critical step in keeping Camaro competitive considering Ford launched an all-new platform for the 2015 Mustang – which got its first-ever independent rear suspension.

The new platform is expected to yield a lighter car and, from a visual perspective, one that adopts a more fastback appearance than the outgoing Camaro.

(Click Here for details about the upgrades on the new Shelby Mustang 350GT.)

As with the current model, the 2016 Chevrolet Camaro will be offered in a variety of trims and, at least for now, the SS model, the highest-performance package, will be wrapped around that 6.2-liter V-8. Chevy has revealed that the new Camaro will allow a driver to run through a series of driving modes, including Snow/Ice, Tour and Sport.

The SS will add a Track mode. Each will adjust a variety of vehicle attributes, including throttle, shifting, steering feel and stability control. In Track Mode, for example, most nanny features, such as electronic stability control, will be dialed back to their least intrusive settings.

The 2016 Camaro also will offer the sort of electronically controlled exhaust system we’ve seen on a number of high-performance European models, such as the Jaguar F-Type. Depending upon how you have things set, electronically regulated valve will let exhaust gases bypass the muffler. The result: less back pressure, better performance – and one very loud exhaust note.