GM and Disney Take a Trip to Tomorrowland 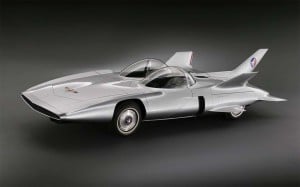 The winged Firebird III concept car was one of several GM developed to showcase turbine power.

Is it back to the future…or forward into the past?

The new Disney movie, Tomorrowland, sets actor George Clooney out on a search for a secret location caught between time and space. And among the discoveries they make when they get there are a collection of classic General Motors concept vehicles, including the jet-powered Firebird III and the Space Age Astro II.

“Tomorrowland is a place where nothing is impossible, which is something that Chevrolet believes can exist in the here and now,” Tim Mahoney, vice president, Global Chevrolet, said when announcing GM’s participation in the Disney flick – which also showcases several modern vehicles including the next-generation Chevy Volt.

Opening today at theaters around the country, Tomorrowland is the latest effort by the Disney empire to capitalize on a familiar theme from its amusement parks. It scored a smash hit with a series of movies based on the long-popular Pirates of the Caribbean ride – a fourth film now in production. 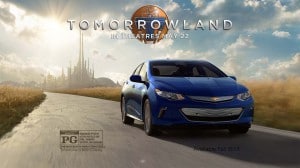 Not surprisingly, Chevrolet is running cross-promotional ads for the Disney film - and the Volt.

Whether the new movie will resonate as well is uncertain, the flick generating mixed reviews. But concept car fans could be lured to theaters to get a glimpse of the five classics GM dusted off for director Brad Bird.

GM describes them this way:

•Firebird III, which debuted at the 1959 Motorama. It was an extravagant prototype with a fiberglass exterior, seven short wings and tail fins. This vehicle, like both generations of the Volt, allowed drivers to pre-condition the interior temperature before entering the vehicle.

•Firebird IV was an experimental car created to highlight what could be possible on automatic highways, including the latest infotainment at the time – in-vehicle television. The vehicle was built for the 1964 World’s Fair in New York, which plays a key part in the plot of Tomorrowland.”

(Chevrolet FNR concept hints at driverless future. Click Here to check it out.) 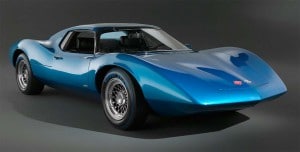 The design of the 1968 Astro II concept hinted at the look of the next-generation Corvette.

•Astro II. Aerodynamics, also key to the design of the Volt, heavily influenced the design of the Astro II prototype. The vehicle was revealed at the 1968 New York Auto Show and at the time had speculators wondering if it was the next generation of the Corvette.

•Astro III was a sleek, two-passenger experimental car in 1969 resembling an executive jet aircraft, even down to its low center of gravity tricycle-type wheel arrangement. The Chevrolet Volt’s battery lowers the vehicle’s center of gravity, enhancing stability and handling in inclement weather. 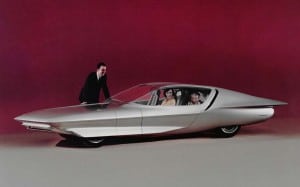 The Firebird IV concept introduced the idea of autonomous driving - and added a TV inside.

•Chevrolet built the Express concept in 1987 as part of a project consulting with the federal government about building high-speed, limited access commuter roads open to specialized vehicles. The concept is described as “whisper-quiet” much like the Volt when operating in electric mode.

“The Chevrolet archives are full of innovation in the form of sketches, specs and renderings for ‘the car of tomorrow,'” said Paul Edwards, U.S. vice president of Chevrolet marketing.

One prototype not included in the film is Harley Earl’s 1939 Y-Job, considered the first modern concept car. But the prototypes in Tomorrowland did introduce a number of concepts that are either in production today or, like autonomous driving, soon to reach market. Other technologies have never quite made it to prime time, however, notably including the turbine engines of the Firebird show car series.