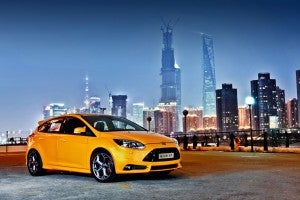 With the economy faltering, the Chinese car market is growing at its slowest rate in 15 years – and Ford Motor Co. says it may respond by trimming production in the once-booming China.

That would be a sudden shift in direction for Ford which, only two months ago, announced the opening of a major new plant in Hangzhou, part of its plan to double production capacity in the populous Asian market to 1.2 million vehicles annually.

“If there is softness in the market, I won’t let stocks build and we’ll cut production,” said David Schoch, president of Ford Asia Pacific. So far, he added, “We have had some production cuts, but it’s nothing material.”

Chinese car sales have grown from a small base to become the world’s largest automotive market over the last 15 years. In some years, the rate of annual growth has approached 100%, and China continued to post double-digit gains even during the global economic recession that saw the U.S. market fall to its lowest level in decades.

But the overall Chinese economy has begun to sputter this year, and industry groups now anticipate the market will grow at less than 10% for all of 2015 — the pace running around 7% for the first four months of the year.

That could be “the new normal,” warned Schoch.

Complicating matters, local brands that once had to settle for the crumbs left by foreign manufacturers are suddenly gaining ground – and even dominate in a few niches, including compact crossovers. The Wuling Hongguang was the Chinese market’s best-seller last month. And though Wuling has an alliance with General Motors, the fact is that four of the Top 10 vehicles on Chinese sales charts last month came from domestic brands.

Few experts anticipate local brands will take the lead, at least not anytime soon, but their rise does raise concerns about the aggressive expansion plans of foreign manufacturers like Ford, which not only is expanding its capacity but adding new models such as the all-new version of the Taurus sedan that was unveiled at last month’s Shanghai Motor Show.

That vehicle was“designed especially to meet the needs of the Chinese market,” emphasized John Lawler, the chairman and CEO of Ford China.

Ford is by no means the only foreign maker investing heavily. Volkswagen on Tuesday dedicated the latest of its new plants, though it plans to add even more capacity.

Such plans come at a time when, “We have seen a little bit of a slowdown in showroom traffic,” noted Ford’s Schoch. Barring a sudden upturn in the Chinese economy, Ford is now estimating sales in the market will run between 24 million to 26 million for all of 2015. While that would more than lock down China’s position as the world’s largest automotive market, that is nonetheless a cut of 500,000 vehicles original forecast for the year.