Most owners expected to go as much as 1,500 miles between fill-ups. 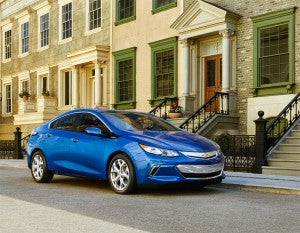 The gen-2 Chevrolet Volt is designed to spend even more time operating in electric mode.

Chevrolet is once again cutting the price of its Volt plug-in hybrid – but this time, the $1,175 discount comes with the launch of an all-new version of the extended-range electric vehicle. The 2016 Chevrolet Volt will cost as little as $26,495 when federal credits are taken into account, and some states offer additional financial incentives.

And, at the same, time, the 2016 Chevrolet Volt will be getting a big boost in range, the compact battery car expected to deliver an EPA-rated 50 miles in electric mode alone.

“The next generation Chevolet Volt delivers more technology, the ability to drive further between gas fill ups and now with even more value to our customers,” said Steve Majoros, director of Chevrolet marketing. “We are confident we will continue to attract new customers to Volt with the vehicle’s product improvements and attractive price.”

Automakers have been slashing the price of their plug-based vehicles over the last year or so. That includes not only the first-generation Volt but offerings such as the Ford Focus EV and the Nissan Leaf. That, in large part, reflects a desire to charge up sluggish sales at a time when fuel prices are down by a third from their 2014 peak.

But manufacturers say they’re also able to pass on their own savings as they drive down the cost of the batteries used in vehicles like the Chevrolet Volt. At the time the original model was conceived, industry experts note, its lithium-ion batteries cost about $1,000 per kilowatt-hour. That’s a hefty penalty for a vehicle using 16.5 kWh of the advanced technology. 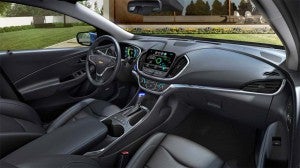 An upgraded interior - with room for five.

While GM and other makers rarely disclose specific details, industry insiders believe lithium batteries are now running closer to $400 per kWh, with a goal of driving that down as low as $200 by decade’s end.

New batteries are also more energy dense – which translates into being able to store more power in a smaller space. And with the 2016 Chevy Volt that means engineers were able to scale back the big T-shaped battery pack that limited seating to four and placed a big divider between those sitting on the left and right sides of the vehicle.

But the most important factor for many motorists is that they will now be able to go significantly further in electric mode with the 2016 model’s 18.4 kWh pack. At a rated 50 miles, that’s 31% farther than with the Gen-1 Volt. That means more owners – and potential buyers – would be able to operate solely on battery power. In fact, the new Volt comes a lot closer to the range of some pure battery-electric vehicles, such as the Mitsubishi i-MiEV, that barely manage 80 miles per charge.

As before, the Volt will continue to offer a motorist the ability to keep going even when its batteries run down. When that happens, its “range-extender” engine automatically fires up. 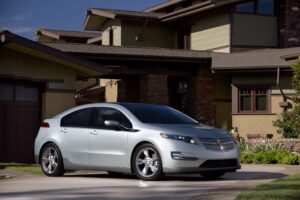 The original Chevy Volt had a more distinctive exterior design than the new model.

The new Volt adopts a more advanced new 1.5-liter inline-four range-extender gas engine that promises to be smoother and quieter than the original back-up powertrain.  The engine produces up to 101 horsepower. At its peak, the 2016 Chevy Volt will produce a maximum 149 horsepower, with torque jumping to a full 294 pound-feet. That’s why the development team was able to trim a half-second off the new Volt’s 0 to 60 launch time, now an estimated 8.4 seconds.

According to Executive Chief Engineer Pam Fletcher, Chevy expects owners to get more than 1,500 miles between fill-ups. Fuel economy when running on gasoline will climb to 41 miles per gallon, while the EPA’s MPG-e, or miles per gallon-equivalent, rating shoots to 102.

The 2016 Chevrolet Volt will start at $33,995 – which includes $825 in delivery charges – compared to $35,170 for the old model. Buyers can take advantage of $7,500 in federal tax credits, and additional credits are offered in California and a number of other states.