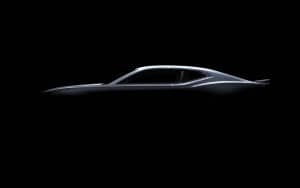 Chevrolet will stage the official debut of the 2016 Camaro in Detroit next weekend.

They may be called muscle cars, but it takes more than a big engine to make a car like the Camaro go fast. And with the new model set to debut next weekend, Chevy says it has put a premium on aerodynamic enhancements, as well as lightweighting.

As this shot – the most revealing teaser image yet– shows — the 2016 Chevrolet Camaro has spent a lot of time in the wind tunnel to both reduce aerodynamic drag and improve the cooling of its big 6.2-liter V-8.

“The importance of aerodynamics increases exponentially as we increase vehicle performance,” said Kirk Bennion, Exterior Design manager. “As engine output increases, we need more engine cooling. As acceleration and top speeds climb, we need to reduce lift for better high-speed stability. However, we cannot make any changes at the expense of increasing drag, which can hurt fuel economy.”

The new car spent a total of 350 hours in the wind tunnel, according to Chevy officials and by adding such things as a new underbody pan and front “spats,” front lift was reduced by 30%. At the same time drag was cut sharply, even while improving engine breathing.

The all-new pony car will make its public debut on May 16th during an unusual, day-long celebration on Belle Isle, the 982-acre island park a couple miles from parent General Motors’ downtown Detroit headquarters.

While it will bear plenty of similarities to the outgoing model, there will be plenty of changes, as well. For one thing, the 2016 Chevy Camaro will now use a modified version of the compact platform first introduced for the Cadillac ATS. That means it will be slightly smaller than the current muscle car introduced in 2009.

It also will yield a more modern suspension than the current Camaro. That is a critical step in keeping Camaro competitive considering Ford launched an all-new platform for the 2015 Mustang – which got its first-ever independent rear suspension.

The new platform is expected to yield a lighter car and, from a visual perspective, one that adopts a more fastback appearance than the outgoing Camaro.

As with the current model, the 2016 Chevrolet Camaro will be offered in a variety of trims and, at least for now, the SS model, the highest-performance package, will be wrapped around that 6.2-liter V-8. Chevy has revealed that the new Camaro will allow a driver to run through a series of driving modes, including Snow/Ice, Tour and Sport.

The SS will add a Track mode. Each will adjust a variety of vehicle attributes, including throttle, shifting, steering feel, and stability control. In Track Mode, for example, most nanny features, such as electronic stability control, will be dialed back to their least intrusive settings.

The 2016 Camaro also will offer the sort of electronically controlled exhaust system we’ve seen on a number of high-performance European models, such as the Jaguar F-Type. Depending upon how you have things set, electronically (regulated valve will let exhaust gases bypass the muffler. The result: less back pressure, better performance – and one very loud exhaust note.

(Click Here for a tribute to the pioneering Denise McCluggage, dead at 88.)