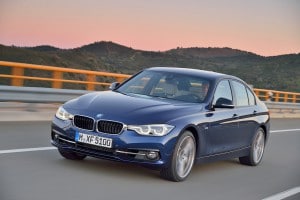 BMW is looking to keep the 2016 3 Series atop the luxury heap in its segment with a several updates for the new version.

Setting the benchmark has its advantages. You’re the one everyone is likely to think of. The disadvantage is that competitors also think of you – and look for ways to knock you off your perch.

So, it’s probably no surprise that BMW is updating the iconic 3 Series line-up for 2016. The sedan and wagon models will get some noticeable styling enhancements – including new LED headlamps – as well as a new, 320-horsepower inline-six engine. And for the model line that has come to symbolize the brand’s claim to building “the ultimate driving machine,” the 2016 BMW 3 Series also will get some handling improvements.

Meanwhile, as part of an aggressive rollout of new green alternatives, the 2016 BMW 330e will be the first plug-in hybrid in the compact line. It is expected to yield as much as 22 miles per charge in electric mode.

The styling changes are relatively modest and largely focus on the face of the new sedan and wagon models. That includes a revised fascia and the optional new LED headlights that will be offered on the 320i, 328i and 328d models – and included as standard gear on the 2016 BMW 340i. 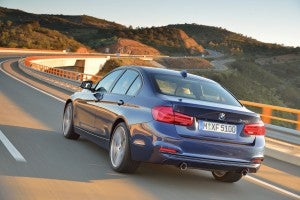 The taillights on the 2016 BMW 3 Series got a mild makeover while the overall changes are designed to give the car a wider and sportier appearance.

The back end’s LED taillights, meanwhile, see minor changes to the overall shape. The exterior changes, on whole, are designed to give the 3 Series a wider and sportier appearance, BMW explains.

Under the skin, meanwhile, the new sedan and wagon models undergo some minor suspension retuning while also adopting a new electric power steering unit. These changes, the maker suggests, are “expressed in reduced roll, improved directional stability and higher level of steering precision.”

But the biggest changes for 2016 come in the engine compartment where the 3-Series gets two new powertrain packages. The first is the B58 turbocharged inline-six engine. BMW will drop the old 335i model and use this package to power the new 340i. While both old and new engines displaced 3.0-liters, the B58 now churns out 320 horsepower and 330 pound-feet of torque, up 20 hp and 30 lb-ft. 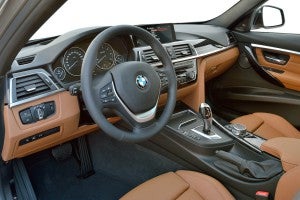 The latest iteration of the BMW 3 Series features the latest in technological updates while getting some performance improvements.

Paired with an eight-speed automatic transmission, the 340i can launch the sedan version from 0 to 60, BMW claims, in 4.8 seconds. The xDrive unit needs just 4.6 seconds. Buyers can alternatively opt for a six-speed manual.

German makers have plugged in big-time when it comes to electrified propulsion systems. Rival Mercedes-Benz recently promised to roll out 10 plug-in hybrid models by 2017, and BMW isn’t far behind. That means a first PHEV for the 3 Series, the 330e. The maker has yet to reveal full details, but says the package will make 250 hp and 310 lb-ft. It will hit 60 in 6.1 seconds and get those 22 miles in battery mode. But it has yet to reveal EPA fuel economy numbers.

Other changes for 2016 include a Track Handling Package offered on gas versions of the 3 Series. It pairs such performance niceties as Variable Sport Steering, Adaptive M Suspension and M Sport Brakes.

(To see more about why fuel economy numbers for new vehicles are sliding, Click Here.)

The 3 Series has long been BMW’s most successful model-line, generating about a quarter of its global sales. But it has been facing increased competition from not only German rivals like Audi and Mercedes-Benz, but also Lexus – with the latest-generation IS and new RC Coupe models – as well as Cadillac’s well-reviewed ATS line.

No word on updates to the BMW M3 yet, but that could follow closer to the official launch of the 2016 model-year.