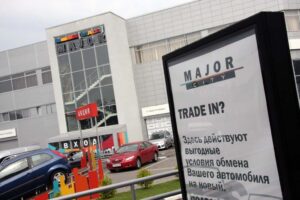 Sales have been slow at showrooms, like Moscow's Major mega-dealer, with little prospect for a quick turnaround.

On the heels of General Motors’ decision to pull up stakes in Russia, the country’s auto sales continued its dramatic descent in April dropping 41.5% despite the country subsidizing its auto loans.

According to the Association of European Businesses, the country sold 132,456 cars and commercial vehicles last month. The only upside for the country is that the top 10 sellers were all Russian carmakers.

“With 132,000 new vehicle registrations, total market sales in April mark a new low point in the AEB sales history over the past 10 years,” Joerg Schreiber, chairman of the AEB’s automobile manufacturer committee, in a statement. “Only in 2009 did we record a similarly weak but slightly better result for this month. The similarity to 2009, the year of the Lehman crisis, demonstrates the severity of the present situation.

“The dynamics of the current crisis however are different, last not least this time the government responded much earlier with selective countermeasures meant to avoid an even deeper fall. Therefore, we do not expect YOY market performance to deteriorate much further, rather we foresee a gradual flattening of the negative trend in the coming months.”

The government has been trying to help end the slide. In addition to providing loan assistance, buyers can now lease vehicles and rebates have been extended. GM, Ford and other major automakers have cut prices to help spur sales.

The impact of the loan subsidies may just beginning. In April, 19,125 vehicles were sold on credit with reduced rate during the first month of preferential car lending program, according to an RIA Oreanda news agency report.

(Click Here for details about GM slashing its presence in Russia.)

However, there have been a 105,000 credit applications, of which 57,319 units have been approved, IHS Automotive noted. The group’s light-vehicle forecast for Russia this year is 1.81 million units, which is a decline of 27.4%.

(To see more about the lawsuit filed against BMW by employees, Click Here.)

The country’s sales are down 10 percentage points more than that so it sounds like there will be a significant uptick in the second half of the year.