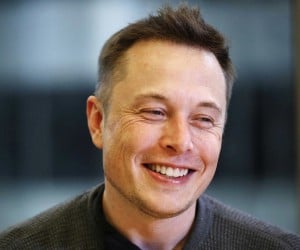 Why is this man smiling? Over $6 billion in stock might help when added to Elon Musk's meager base pay.

While most automotive CEOs can expect to take home seven- and even eight-figure paychecks, Tesla Motors founder and Chief Executive Elon Musk earned barely as much as one of his company’s assembly line workers last year, just $35,360.

But lest you worry he can’t support his large family, Musk has also benefited handsomely from the surge in Tesla stock over the last two years – while also taking home a paycheck from Space Exploration Technologies, the private rocket launching service he also founded.

Though well off from its 52-week high, Tesla stock has been on a roll in recent weeks, investors betting on a strong first-quarter earnings report – and on the new line of business Tesla is expected to announce next week, the company reportedly planning to enter the stationary battery power market.

Tesla’s likely push into stationary power would coincide with plans to start producing batteries at its Gigafactory in Nevada. The $5 billion facility will produce battery packs for future Tesla products, including its mainstream Model III, but barring a huge expansion of the battery-electric vehicle market it could need other lines of business to come close to meeting capacity, analysts have cautioned.

It also helps that Musk is involved in the Solar City venture. One downside of solar cells is that they produce power only during daylight hours while many homes need most of their power at night. Affordable stationary battery packs could change that equation and expand the appeal of solar technology.

Next week’s anticipated announcement is just one of the things investors will be watching for. There’s also the first-quarter earnings report that Tesla plans to release on May 6th.

The company says it was able to deliver a record 10,000 Model S sedans during the January-March period which could translate into strong numbers – though Tesla also is investing heavily to get its next vehicle line, the Model X SUV, into production later this year, about two years behind the original schedule.

Nonetheless, investors have been growing warmer to the California carmaker after an unexpected chill dragged down shares of TSLA in recent months. The stock had a 52-week high of $291.42, and a low of $217.15. At midday Thursday it was trading at $219.04, down about 0.2% from Wednesday’s close.

(Check out our review of the Tesla Model S 70d. Click Here.)

That’s good news for Musk who is more dependent on his stock holdings than many other industry executives. Ge took home just $35,360 through all forms of compensation last year, Tesla announced through the proxy statement it issued this week. At around $680 a week, that’s less than what Tesla pays many of its line workers at the Model S assembly plant in Fremont, California.

Meanwhile, he can also take solace in the fact that the 28.3 million shares of TSLA in his portfolio – 22% of Tesla’s total – are worth more than $6 billion now – and would gain another $2.04 billion if those shares climbed back to their previous peak.

Musk also gets a paycheck from SpaceX, as the rocket company is more widely known, though the privately held form doesn’t release financial details.

(Autonomous vehicles are coming – and from some new players, including Tesla and Google. Click Here for more.)